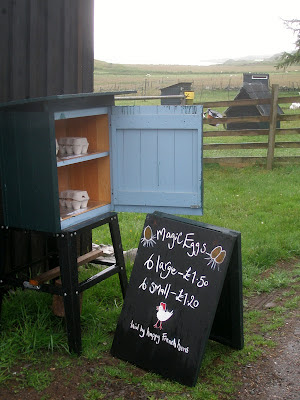 Eggs are flying off the shelves, the hens can't keep up. They are "magic" in the Glaswegian sense of being "   pure dead brilliant, by the way", they aren't hallucinogenic and the hens haven't been fed on cannabis. Kate did the sign, I'd have just written, "Fresh Eggs".

Just goes to show , your marketing has to be eye catching even at the farm gate. As Bresse Gauloise they should of course have blue, not pink legs. She can correct that next time she comes and add," eggs from ducks that are even happier".
Posted by Tom Bryson at 08:47 No comments:

View from the kitchen

Craigard kitchen has two windows facing south and west respectively. I've often tried to photograph the view from each without success. However, my house sitters while I was on holiday were Artist friends, they did a far better job than my camera. This is a selection of their paintings and drawings.

None of the above is visible today as the cloud is right down to sea level but normally its quite inspiring while I peel vegetables.

View from the kitchen sink..... the road winds another mile or so up to the top of Ormsaigbeg. Its very busy at the moment with visitors and their cars. In the winter there are only five occupied houses and the Post Office van twice a day.

This original stone built byre is now the workshop, chicken brooder house and kennel for Mac the dog who should keep the pine martens and mink out!

And finally.....because its the curse of the internet that we can all be subject to our friends to our holiday pics at long range ad infinitum.......... Derek's painting of the lighthouse.......... Enough for now. 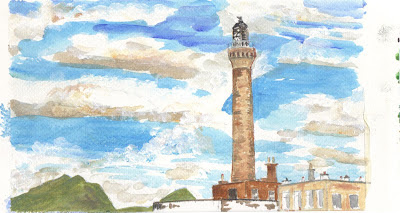 
I collected "Mac" yesterday; he's eight months old, just the right age to learn the basics; "come, sit, down" and "heel". Working with sheep comes a bit later when he'll be bigger, stronger and bolder. On the training lead he's obviously keen to work and even useful when moving the ewes. The first day has gone well; three 20 minute training sessions and he responds to "come" and "sit".


Lambing out of doors without a trained dog is difficult. To do the job properly you have to catch the ewe after she has given birth to check that she has milk. A good dog will "hold" the ewe with its eye while you catch it with the leg crook ( the cleek). Of course during the rest of the year we need to move sheep between fields and to drive them into the handling pens for routine inspections and treatment. If you don't have a dog the ewes become truculent, no amount of arm and stick waving will drive them on so a dog is essential.

Shepherds have had to catch sheep ever since they were first domesticated and there are images of the leg crook dating back to biblical times. The sheep has almost 360 degree vision but if you approach from directly behind you can catch and hold it safely and humanely by the back leg with the cleek. The lambing stick, cromag or crook on the left is fine for catching small lambs before they can run fast but otherwise its just another walking stick.

Crofters have holidays too and mine started today ( 7th June) with a day trip to Lunga and Staffa on the "Islander" a new, fast catamaran based in Tobermory. I'd been monitoring the weather all week, light winds and sunshine were forecast since last Sunday. Its the peak of the seabird breeding season and Lunga has vast numbers of puffins, razorbills, guillemots and fulmars.

About an hour out of Kilchoan, up the Sound of Mull and round the north west tip of Mull we landed on Lunga. The island hasn't been inhabited since the mid 19th Century but there is a well worn path down the west coast to the seabird colonies. You can't get lost.


Its really refreshing not to have National Trust type interpretation boards, "Grass may be slippery when wet" signs and Rangers. You are on your own, work out for yourself what the birds are and why they behave the way they do.As just about every British citizen over twenty has sat through a zillion hours of wildlife television including Spring-watch last night we are all very well informed thank you.


Up the hill and along the cliff within five minutes of the beach landing and you are standing only feet away from the puffins and their burrows. You don't have to worry too much about disturbing them. Puffins are habituated to visitors and I have been told. they fly back to their nest sites from their rafts out at sea when the visitors boat arrives because the visitors deter the black backed gulls, skuas and ravens.


Sea thrifts, campion and trefoil are all in flower at the moment, there are big healthy looking rabbits that are quite tame and its a stopover for barnacle geese in the winter.


About a mile down the west coast there's a small sea stack ,Dun Cruit, Its a seething, writhing mass of guillemots from the top to the edge of the 30m deep ofchasm between the stack and the sea. The seabird eggs here were an important food source for the inhabitants, who we are told crawled across the chasm on a long pole.


This looks like a b&w picture but it isn't, its full colour, the light, the rocks and the birds create a b&w illusion.

The National Trust for Scotland own Staffa and to their credit there were no slippery grass warnings, no unnecessary interpretation and the handrail along the base of the cliff is rudimentary, so 8 out of 10 for NTS.

The boatman told me that last week he asked a visitor how he enjoyed the trip, "better than sex " he said. The trip did exceed my expectations but I have a vague recollection of sex and the trip wasn't quite that good.
Posted by Tom Bryson at 00:08 No comments: