The foxes and the geese

Five years ago I planted a shelter belt of mainly broadleaves on the western boundary of the croft and have kept the grass under control with a mix of Roundup and strimming but I don't like using herbicide and strimming is hard work. So I thought , "geese can subsist on grass and two of them eat as much as a sheep but they don't eat trees." I ended up with six Embdens from three sources so  plenty of genetic variation.

I've a good fence with and electrified wire on top to deter the deer and the geese are big and noisy so perhaps this will keep the foxes away. I was wrong two geese were taken and the survivors were very upset and frightened but they found their own solution to the fox problem.

Every afternoon at about 3.30 pm they take off and fly down to the little tidal lagoon below the croft where if a fox comes along they can jump in the water and be relatively safe. Next morning  they fly back for breakfast; some  mixed grains followed by a day grazing. They have either worked out this strategy for themselves or it's instinct and they're behaving more like wild geese.

I really don't understand why so many people think foxes are cute and cuddly creatures, they are wanton killers. Fifty years ago when I was lambing in Glen Isla on my early daily round of the hill I found 12 dead lambs strewn about their heads missing, they'd been killed for fun, by a fox. The next night the estate gamekeeper sat up with a rifle waiting for the fox to come back for more fun.... end of  fox!

Another solution, the end of the goose killers. 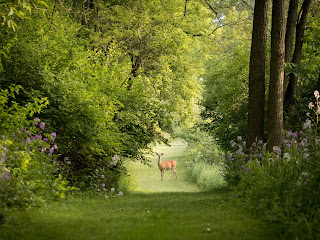 Two weeks ago the French equivalent of "The Guardian", "Le Monde", published a lucid, well argued and well written article outlining the case for banning hunting in France ( I read "Le Monde" from time to time to keep up my French and I'm almost totally deaf so conversations are difficult.)

This was a totally one sided statement because it was the tactical and partisan case against hunting. But as a stalker it made me think about my own position; how could I justify what I do in the face of these arguments.  Here we go; there were five main objections;

So I'll deal with each of these reasons for banning hunting and then tell you what I think might be an ethical pro-hunting argument.
Safety
Traditionally British shooters have safety drummed into them before they pick up their first lethal weapon; never point a firearm at any one or thing unless you intend to kill it, treat every gun as if it is loaded and cocked, always have a safe backstop behind your target ....and again.....treat every gun as if it is loaded and cocked !
In the UK as in France hunting is done in areas of high population density; there are walkers, horse riders, car drivers , farm workers, foresters about so here in the UK the criteria for holding a firearm certificate are stringent as are  the security arrangements for  firearm and ammunition storage.  Our system seems to work but there's no room for complacency.
Hunting isn't a sport
Does it matter if hunting is or isn't a sport?  why should being a sport make hunting more acceptable.  It is actually a vital wildlife management activity, does it matter who does it, they should be trained, skilled and the killing is done humanely....... this is true of UK stalkers?
It's a tradition
Being traditional doesn't necessarily make a practice acceptable; bear baiting, sending little children up chimneys and Morris dancing come to mind.  Industrial scale rearing and shooting of grouse  and pheasants has been going on since the 19th century, now  as practised by city gents in Edwardian fancy dress and big hats it's pretty indefensible especially when most of the birds end up as landfill.
Rough shooting or walking up game birds with setters or pointers  is much more acceptable to me and most of the birds are eaten after they are shot.
Killing protected species
Every discovered case of killing eagles or harriers by gamekeepers is very well publicised, those who do it become social lepers but as yet do not seem to be punished in accordance with the severity of the offence. Perhaps some training for Magistrates is needed.
Shooting causes pollution
Lead and plastic rain down on the landscape but change is coming; copper rifle bullets and steel shot will replace the lead and I can remember when cartridge cases were made of cardboard, the least shooters can do is pick them up and take them home.
Weak economics
Here in the N W Highlands tourism is the main source of rural income followed by farming and forestry and tourism is by far the largest source of employment. Beware of dodgy economic arguments. Might an older form of hunting in a wooded landscape be more acceptable to stalkers, wildlife managers and the public in general.
So you see it's difficult to refute such a strong case against stalking...... so why do I do it?
Roe deer are active and begin to feed around first light, an hour before sunrise in summer when the  new light is spilling over the landscape, the dawn chorus is still going strong , it's often warm windless and still
.... it is the best time of day. In winter it's more challenging, last week stalking roe on the hill in Glen Tanar it was snowing, sodden underfoot and there was a chilling wind but I still enjoyed it, shot a deer which was then butchered on the kitchen table and is now in the freezer. Every outing is a memorable adventure but not always an excellent set of meals when the deer don't turn up.
We have too many deer in Scotland; in the 20th century the population of wild deer more than doubled as woodland cover increased and culling was largely limited to deer stalking estates. Too many deer are damaging to commercial forestry and biodiversity so they have to be culled.... deer stalking is deer population management and has to be done. If you are interested in taking this further follow the link   The management of deer in Scotland .
Please feel free to comment.
Posted by Tom Bryson at 02:46 No comments: