While I was away in France a photograph taken by a holiday maker appeared in the Press & Journal of a pine marten and a "wildcat" together. The pine marten appears to be retreating and we ( my neighbours and I) are pretty sure that the photograph was taken in the garden of a nearby house, "Ardvaig" part of Mimi's territory.

My cat arrived here from the Cat's Protection League in Acharacle in December 2014. She was neutered and we thought she was just another tabby cat. Then I had a call from one of a team of vets neutering cats on the peninsula as part of the Scottish Wildcat conservation programme. He told me that they had just neutered her siblings and that they were wildcat hybrids and he asked if she had been neutered.

You can distinguish a domestic tabby from a hybrid and a true Scottish wildcat by examining their coat markings. DNA testing is the definitive, objective method  but perhaps the next best is pelage scoring. You can find out about this on the Scottish Wildcat Action website.Wildcat pelage scoring We did this and Mimi was indeed a hybrid.

You can see images of Mimi being wild; climbing trees mainly, soon after she arrived here on the blog at www.craigardcroft.blogspot.com/2014.

Barn owl in the freezer 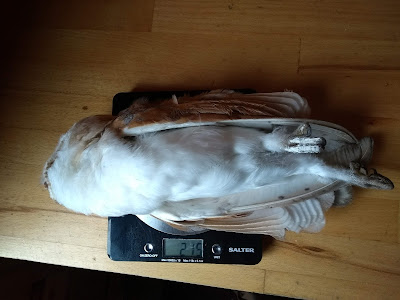 I found a dead, male barn owl this morning, under the beam in the barn where they normally perch and roost. It was so light weight almost as it were only feathers. When I weighed it on my kitchen scales it was a mere 216g a healthy adult male should weigh 360g.

The past three weeks have been cold, wet and windy, perhaps the tail end of "Storm Ali" that we got this week was the last straw after nearly three months of feeding three owlets. Hamza is away in Spain filming so it's now in the kitchen freezer. He wants to take it to a taxidermist!
Posted by Tom Bryson at 05:47 No comments:

There has been a steady decline in the population of UK house sparrows during the last 100 years, probably since the motorcar replaced horses on our streets. Changes in farming practice have had an effect too, particularly the lack of winter stubble after a swing to autumn sown cereals and oil seed rape. But house sparrows aren't endangered here on the peninsula, my old buildings provide plenty of nest sites and the sparrows feast on food that's meant for the hens.

When I came back from holiday there must have been 50 house sparrows around the buildings and the poultry feeders, Alisdair thinks that they were eating as much as the hens.  But this morning there were only five or six on the fence by the barn.. I now know why.

This afternoon I went into the old byre to check on the water supply and as I was standing there a sparrowhawk shot in through the door, flew past me at waist height and dived to the floor. It picked up a sparrow in it's talons and swerved out of the door. It was all over in about two seconds.
Posted by Tom Bryson at 10:31 No comments:

A summer in the Pyrenees 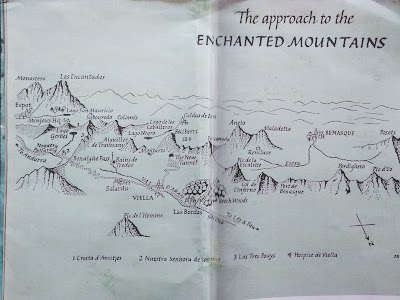 Fifty years ago I read a short account of a two person expedition into a remote and then inaccessible region of the Pyrenees, " the Enchanted Mountains" by Robin Fedden", then " The Pyrenees" by Hillaire Belloc and " Backpacking and Camping in the Pyrenees" my imagination was captured.

When I discovered that there was a long distance footpath through the mountains from Hendaye on the Atlantic coast to Banyuls sur Mer on the Mediterranean, the GR 10  I wanted to do it but work always intervened. Fifty five daily stages plus rest days meant I needed ten weeks to complete the route in one trip. This year 2018 I retired and I had the time but could an old man of 75 with dodgy knees, spindly legs and a heavy pack walk 1,000 km while climbing and descending  53,000 m.

This was also the year when I passed from, "wrinkly"  to "crumbly" a state of decrepitude that includes aching joints, painful legs, a fallen arch and increasing deafness. On 26th June, my 75th birthday, I met up with Rob Bolton (only 65 years) at Hendaye, we set off full of optimism from the old Casino above the beach and headed East; a relatively easy day for the GR10, 21 km but only 700 m of ascent.

After a week, at St. Jean Pied de Port Rob left for home and work. I carried on, on my own, through the Basque country followed by at least three species of vulture attracted by my slow pace, stumbling gait and white hair. It wasn't until I reached the High Pyrenees that they gave up. After ten 20 km days with 1200 - 1500 m of ascent and descent over high cols and a fall due to exhaustion I needed a Plan B.

Plan B would have to consist of shorter days, 10 to 12 km and avoid the most brutally hard descents. Walking uphill is fine but descending long, steep  eroded footpaths tough on the knees and rather slow. I took a day off to study the trail guide and the bus and train timetables also bearing in mind that hitch hiking in the mountain regions of France is easy.

Pyrenean valleys run from south to north so it's possible to avoid some of the harder stages of the GR!0 by travelling north, then east and back south again to re-start the route. There are also more mountain refuges and gites d'etapes as you get further east with the exception of the Ariege, this enables shorter daily walks.

Early on day 12 after 200 km and 6,000 m I walked out on to the road and stuck out my thumb. In two lifts and less than two hours I was at the railway station at Oloron Ste. Marie and the free bus service to Pau. ( When industrial action disrupts train services in France a free bus service replaces the cancelled train)

This was the start of Plan B, wandering in and out of the valleys then east over high passes to encounter shepherds and walkers, wildlife and  forests, spectacular mountainscapes, good food, wine and hospitality.

It was a summer of relaxed wandering rather then hard trekking through the mountains. So, rather than write a blow by blow account of travelling from west to east with the wind behind me and a schedule to keep , I have had enough memorable encounters to write posts about my summer as a vagabond free wheeling through the mountains with no hard and fast plan.