Hercules and Hero the last of the goat kids

Sheep are fairly predictable when about to give birth. They saunter off to a secluded spot and go through the "Natural Lamb Birth" routine. After all of these years I can judge when they are going to lamb. Goats are different in as many ways as there are different goats.

Hebe is a drama queen and screamer, the whole village knows what she feels like. Acorn on the other hand is quiet as a mouse. At lunchtime I thought, " nothing will happen until this evening. When I went up the hill at 4.30 to bring them down there were three kids, Acorn had produced twins.

The twins, Hector and Hero, were up and suckling. They had been born on a bed of heather, in the sun with only the lightest of breezes to dry them off. No fuss at all .All they needed was a squirt of iodine on their navels. Mother drank a 5 litre bucket of water without stopping.

Now I have a dilemma. Three male kids have only one useful attribute. They make excellent curry. Disadvantages include being sexually active from about three months of age, it costs fifty pounds for the Vet to de-horn them and my vegetarian family get attached to them.

If we did not kill animals in order to eat them would we be obliged to keep them as animal incompetents, until they died of old age? Better surely to have a short but happy life and humane slaughter than not to have lived at all. Your comments are welcome.

A bit traumatic but necessary.

If I was starting again with goats I'd start with horned animals.   In mixed herds of horned and hornless animals the horned individuals come out on top in every conflict and injuries can be serious. Your goats have to be all horned or hornless.

Goats are always in conflict, low level stuff most of the time but the pecking order needs to be continually reinforced.

Removing the horns is traumatic for the goats, their owner and the Vet. It involves burning off the horn buds with a red hot iron, This is done by the Vet during the kid's first week. Calves we can do ourselves but a Vet has to do the kids because their skulls are so thin.

Then there is the journey in the truck a 120 mile (200 km) round trip if the Vet's monthly surgery in the village is outside of the kid's first week. On the whole goats are good travellers, they have the sense to lie down and enjoy the trip unlike sheep.


We had the first lamb of the year two weeks ago. Now all but two of the ewes and their lambs are out soaking up the sun on the Spring grass. So far it has been a good lambing with a lot of twins and the number of twins determines the, "lambing percentage",  the single most important factor in the profitability of sheep farming. Management of the ewes and their lambs from the end of summer until the lambs are weaned is all aimed at maximising the number of lambs weaned from the total number of ewes mated.

A rising plane of nutrition before mating in October maximises the number of eggs shed and potentially fertilised. This is phase one.

After mating the number of fertilised eggs implanted in the uterus depends on continuing good nutrition through December and January.  Nutritional stress now means that some developing embryos will be reabsorbed.

In February and March in the last two months of pregnancy the developing foetus is growing rapidly and the ewe ifs building milk secreting tissue. The feed bill reaches a peak.

During the lambing, in April, its a matter of keeping new born lambs alive; sometimes with assisted deliveries but again its mainly nutrition and hygiene, they must have colostrum and an increasing supply of milk.

With good management and luck we should have a lambing percentage of 150. On hill farms conditions are harsher and expectations lower, perhaps 100 - 110 per cent. In lowland Britain intensively managed flocks produce 180 - 190 lambing percentage.

That's not all! We also have to minimise disease, parasites, accidents ( lambs are accidents waiting to happen), the effects of bad weather and of course foxes. If you have not worked it out; the lamb above has got under the bottom wire, is isolated from its Mum and is very noisy,  hungry and unhappy. 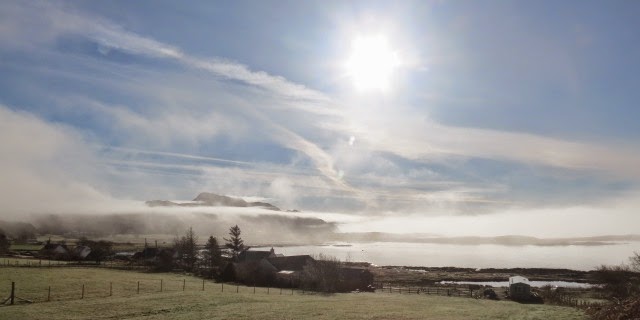 It is a gloriously sunny Easter Sunday morning with Ben Hiant wreathed in cloud, the sea calm and a procession of birds in front of the kitchen window. When I sat down with my morning coffee and croissant I thought a bird count, done in the time it took me to finish breakfast might be interesting.

Immediately around the house there were the usual finches, robins, a wren, thrushes and blackbirds. But along the shore a flotilla of Red breasted mergansers, further out a pair of Great northern divers then Greylag geese, mallard and a heron. It only takes me a couple of minutes to demolish a croissant so a pretty impressive  species count for Kilchoan Bay at eight in the morning. I can't stray far from home as we are only into day 5 of the lambing with another 12 or so days to go.
Posted by Tom Bryson at 02:56 No comments: