The trail camera was busy again last night in the "Owl hotel", not just one owl in the barn but two and they are squabbling over a dead mouse.

We think that one of them, the one on the left is older and the one on the right is probably a juvenile as it seems to be more submissive. It we could see the colours of the wing coverts perhaps we could be more exact.

If there are any owl experts out there perhaps you could give us your view?

Barn owls fit in well with the photographer's millennial  lifestyle, coming home from  from another party at about three this morning . He got this short video with his camera phone.

The owl flies out of the barn then up the road and perches on a branch of a big sycamore.

Under the rafter where the owl perches he found pellets (bundles of regurgitated bone and fur) so it was probably there for so time sitting out the storm.

He then set up the trail camera directly opposite the perch with a dead mouse for bait but it looks as if tonight something else took the mouse or the owl swooped in too quickly for the trail cam.
Posted by Tom Bryson at 02:01 No comments:

This week the European Union could revoke the licence for the use of the weedkiller glyphosate (ROUNDUP). Glyphosate (ROUNDUP) is a non-selective, post emergence, broad spectrum, systemic herbicide.  in other words ," if it's green it's almost 100 % certain that glyphosate will kill it" and its probably killing us too.EU vote on Roundup

If you are under 40 years old you have  been ingesting glyphosate in one form or other for the whole of your life'; in biscuits, potato crisps, bread and vegetables.If you are a farmer, gardener, green keeper or forester you have been directly exposed to this chemical in  it's concentrated form and when diluted as a spray.

The holy grail for the agro-chemical industry since Roundup was first marketed has been crop plants that are tolerant to glyphosate. These genetically modified "Roundup Ready" varieties have two big advantages for Monsanto; increased sales of Roundup and they can sell the GM crop seeds with the chemical as a package. For the farmer there is 100 per cent weed kill and the crop survives.

They have a virtual monopoly. Currently in the USA 90 % of soya beans and 70 % of the corn crop are "Roundup Ready". They are doused with glyphosate, and farmers have to go back to Monsanto for their chemical and seed package each year, they have become a captive market, almost sharecroppers.Roundup Ready Corn

Tomorrow in the media you will see the response of the agro-chemical industry (MONSANTO), the farmer's unions and a few tame politicians. They will reject the science behind the vote and argue that the world cannot be fed without Roundup. There are alternatives to Roundup readiness and we can feed the world without it. More on that later.

No more pine martens until the Spring!


You must have read enough about pine martens by now. But! the photographer is relentless in his pursuit of wildlife imagery and Big Al is ever keen to shoulder massive loads of kit up the hill.  So here we go again.

Having re-housed Peanut the one eyed pine marten we now know that martens find our den boxes  attractive, secure and comfortable homes.  The photographer is convinced that any boxes set up in the woods at this time of year will be full of marten kits in May.

He's never short of ideas. Next project is a huge marten den in his Mother's roof space, it's interior done out like the inside of a hollow tree and 24 /7 filming of the squatters.  I digress..... back to this afternoon. We succeeded in hauling the 20 kg wooden box four metres up an ash tree clinging to a rock outcrop. You have to  assume that house hunting martens are seriously agile. 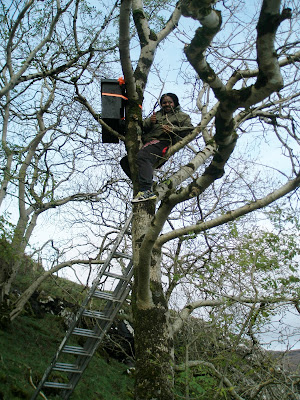 The box is securely lashed to the tree. Next we sprinkle peanuts around the base  and smear the trunk with organic peanut butter.... only the best will do. Trail cameras will monitor the action,  the tree is only metres from a game trail that's well used and trodden.

Now we wait. You know when the martens are in residence, they soon dump a pile of scat on the roof and you can see this with binoculars. More news in Spring 2018.

Build a hut in the woods...... new planning regulations and code of good practice 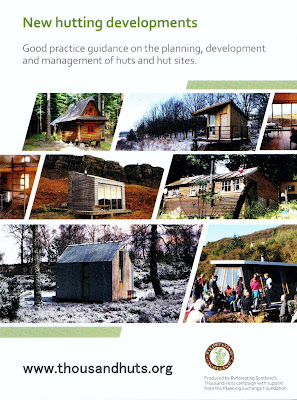 Do you ever dream of owning your own cabin in the woods? A place where you wake up to birdsong and sit on the porch under a dark sky sparkling with stars. .......read on....

Last weekend we had the annual gathering of Re-foresting Scotland, at Comrie in Perthshire. The theme was "re-wilding" but there was also a session on"hutting" and the recent changes in planning law and building regulations to allow people to build simple huts in the countryside for recreational purposes.

After WW1 there was a working class movement in Scotland to get out into the countryside to walk, climb, camp and build simple accommodation for holidays. It has become a Scottish tradition and Re-foresting Scotland's , "1,000 huts campaign" has been driving new developments to make it easier to get planning permission and a building warrant.

The best known hutting community is at Carbeth in Stirlingshire, This community of small huts was established in the 1920s  mainly by people from Clydeside, in 2013 they bought the land that their huts were sited on. Since then hutting has become recognised as a legitimate, valuable and desirable countryside development.www.carbethhutters.co.uk

My Russian friends have their own, self built dachas in the countryside, N. American cousins have lakeside cottages, Germans have their " kleingarten" here in the UK it has been almost impossible to have anything other than a static caravan on a manged site. In Scotland  you can now self-build a woodland hut. But there is still one big hurdle....... finding a site in a countryside where land is so scarce.