Coquetdale red squirrels need your help........ without it they'll be extinct in 10 years.

I am sitting at Janet's kitchen table in Holystone in the Coquet Valley, North Northumberland. We are working on a project submission to the Aviva Community Fund.  The red squirrels in the forest here need funding to prevent their  imminent extinction. You can help to save them!

We submitted this story as stage 1 of an application for funding and now we are through to the second stage where you the public have to vote for us.

Fifty years ago people in the valley saw red squirrels on a daily basis. Today red squirrels are rarely seen because of the incursion of Eastern grey squirrels which were imported from the USA in the 19th century. The greys ( an invasive alien species) out compete the reds for food resources and introduce a lethal disease; squirrel pox, the greys are immune to this. Reds have been replaced by greys throughout Britain. We now have only an estimated 140,000 native red squirrels in in the UK with only 12,000 in England, sixty percent of these are in Northumberland.

The Coquetdale Red Squirrel Group have been trapping squirrels for ten years and eliminating the greys, "with extreme prejudice" as the CIA might say.  The work required to do this successfully is now too much for a small band of volunteers. We need a full or part-time Ranger to trap squirrels, train and motivate volunteers , monitor populations etc... If we won project funding (£10,000) it would enable us to do this for 6 months and evaluate the benefits and unforeseen costs. If successful could  then seek further finance by "crowd funding".

Our aim is to reduce the adult, fertile grey squirrel population by 60% each year.  Population modelling has shown that this is necessary to prevent the replacement of native red squirrels by greys. ( Rushton 2006 )

Selection of the winning projects depends on the number of online votes that each submission receives, first you must register on line,then cast your ten votes for a selection or only one of 59 projects in the "Environment" section. You must be a UK resident in order to vote.  So... please....... vote for our project, "Saving Coquetdale Red Squirrels"

Register, log in and place your 10 votes via this link

Voting is open to UK residents until 20th November 2018

On Thursday evenings  a small group of elderly men  meet in the bar of the, " Kilchoan Hotel" for gossip, discussion of the latest outrage from Trump ....the undoing of enlightenment values, rejection of truth, rationality and science;  beer and sometimes a meal. We also try to organise a small expedition, suitable for elderly and infirm male crumblies each summer.

In 2017 we had a few days on the Knoydart Peninsula one of Scotland';s remotest places and communities. A highlight of that trip was an evening at a "pop-up restaurant" for the best fish and chips in the UK. Since then Big Al has been itching to do this  ourselves on our own peninsula in my old byre ( now  the workshop).

A couple of weeks ago he got his wish. I cooked.... Al provided the ambience with lighting, candles and French stuff. It was after all the " Cafe L'Atelier ". 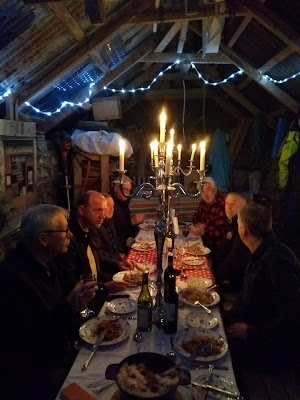 Suggestions for a theme for the next pop-up dining experience are welcome. If your idea is selected you get an invitation. So far we have had, The Roadkill Cafe and  The Post Brexit Apocalypse Dinner which would comprise three courses, porridge, followed by porridge then more porridge we wont be able to afford anything else!

For the best analysis yet of Trumpism and Borisism have a look at this piece by a psychologist in today's Guardian. What Freud can teach us about Trumpism

Last week as he was driving home past the barn "Raptor" saw a young owl on the road in his car headlights it was the third owlet to be hatched.


Barn owls are usually 12 - 13 weeks old when they leave the nest so this one ( the last of the three) must have been hatched around the end of June. Incubation takes 31 - 32 days and the female sits on the eggs until three weeks after the first egg hatches, she must have spent about nine weeks in the nesting box being fed by the male. The first egg was probably laid in late May or early June. 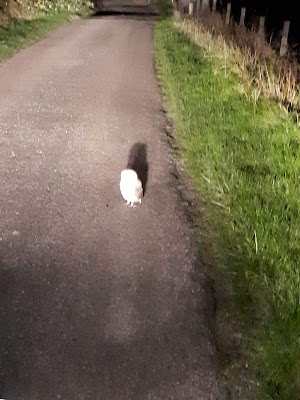 It's not surprising that I found the male dead three weeks ago, after four months of feeding the female, the young and himself then three weeks of wind and rain he was probably starved and exhausted.
Posted by Tom Bryson at 02:36 No comments: