Planned and managed neglect : The future for the crofting counties?

This census involves more than counting Crofters. We know that there are roughly 18,000 of us, from the Shetlands to South Argyll. The "Crofting Commission" is more interested in what we are up to!

The Crofting Reform (Scotland) Act 2010 imposed some new conditions on us these are:

The forms arrived about six weeks ago, they have to be completed and returned by 16 th January 2015. If the Crofting Commission doesn't receive a reply then any subsequent regulatory applications cannot be processed.

Throughout the crofting counties there are many crofts that are neglected and Crofters who live more than 32 km away, that's straight forward enough. The "purposeful use" might cause some confusion and only three examples are given; caravan and camping site, golf course and equestrian centre all of which are high capital cost, demand driven and seasonal .

If you argue that "neglect" is in fact nature conservation then this neglect has to be planned and managed. Sounds pretty easy. Find a rare bryophyte, an otter holt, eagle nest, bats or pine marten on the croft and it could become an instant nature reserve. My guess is that the census will discover that there are more neglected crofts than purposefully managed crofts and this is a "get out of jail free"! card. But I'm just a curmudgeonly old agricultural fundamentalist.
Posted by Tom Bryson at 11:04 No comments:

Driveway mating : Exhausting for the driver

Its quiet in the goat house now but on Friday evening it was bedlam. Acorn a normally sedate goat was on heat; calling, bleating, wagging her tail and mounting the other goats. There was no doubt she was on heat. Last time it only lasted 12 hours so I had to get organized to drive 250km to have her mated as soon as possible. I finished milking at 5.30am and loaded up.

Goats are much more sensible than sheep when travelling in a trailer, they lie down, ruminate and seem to enjoy the ride. Sheep on the other hand stand, push, jostle and shove  they look stressed and uncomfortable.

American goat breeders call this "driveway mating" you load up your goat, drive to the buck's place, unload her (in the drive way) the buck is brought out and mating is over in a few minutes.You load your doe again and set off home. Home at 6.00 pm for the evening milking. Perhaps it is better to own a buck or at least borrow one as we did last year.

A fox killed two hens and a cockerel last night. 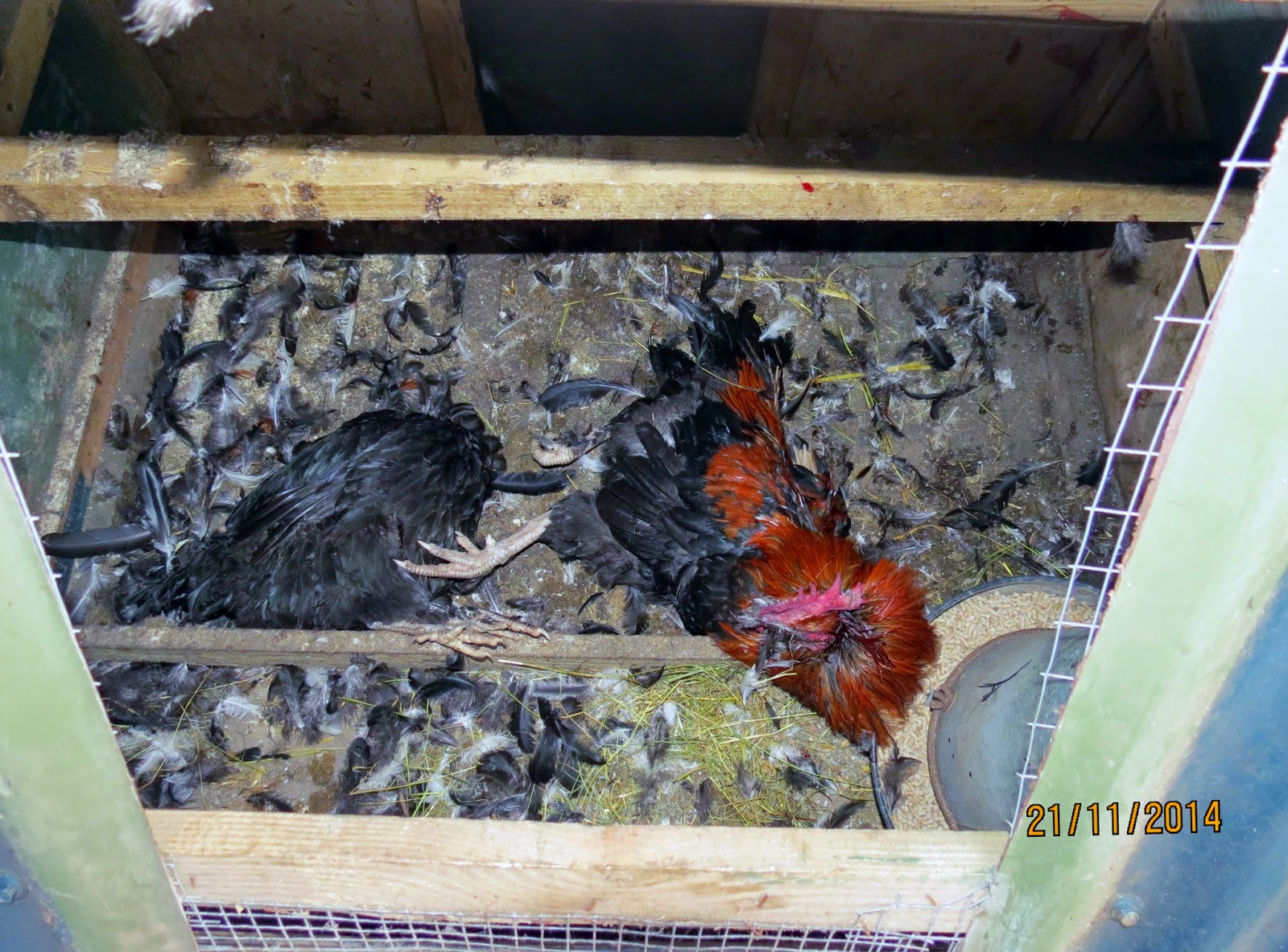 When I went to let the  hens out this morning I found a dead hen and cockerel and a hen missing in the small poultry ark. The corrugated iron roof door had been torn off during the night.

It had to be a fox. A mink wouldn't be strong enough and a pine marten couldn't have climbed out with a full grown hen.

So! what next?  He will be back, probably tomorrow night when he is hungry, they are highly predictable. I don't have a cage trap big enough, my rifle doesn't have a lamp fitted, it will have to be the shotgun. 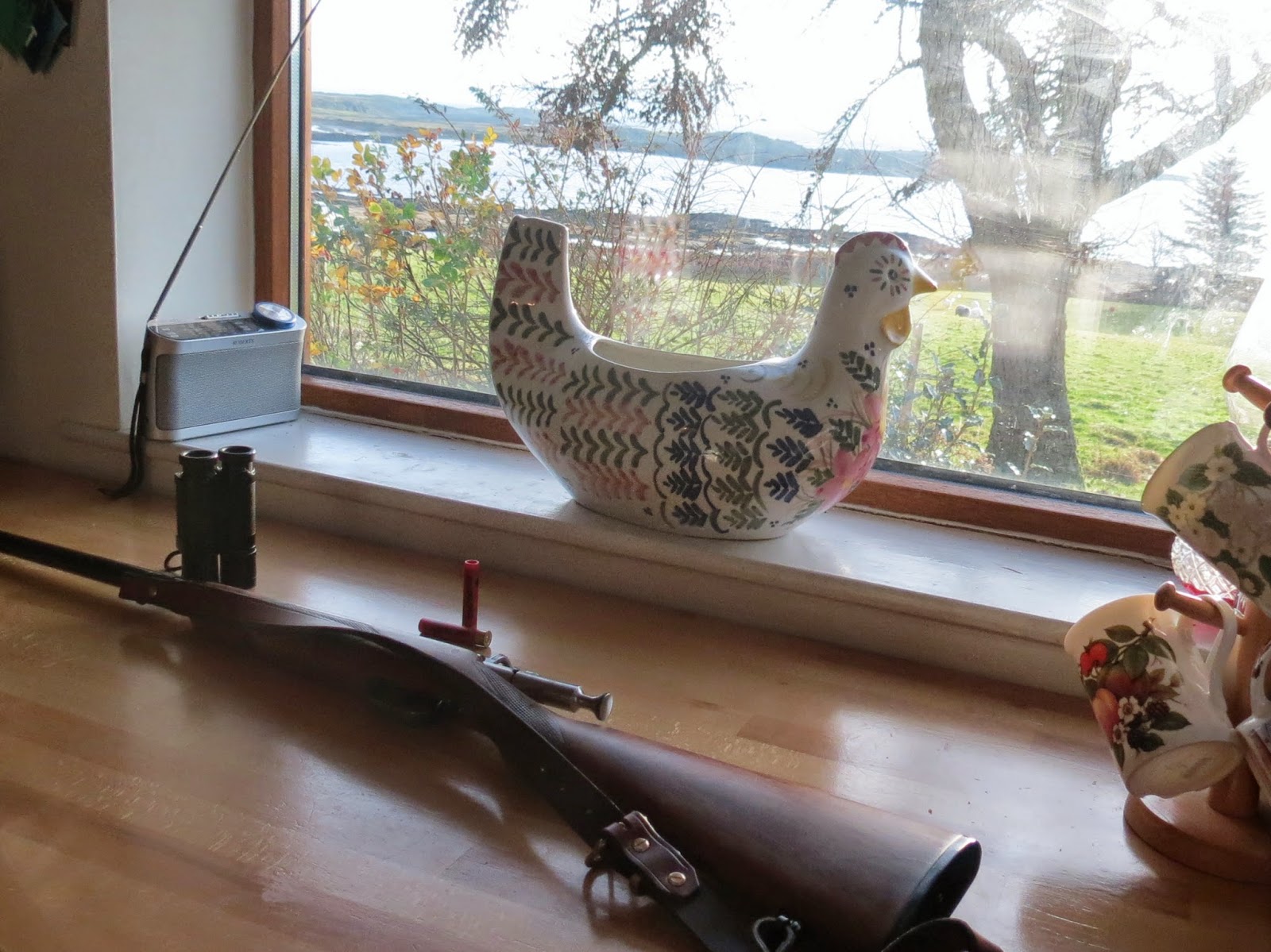 This means sitting up during the night waiting for him. There is no alternative because eventually he will come back again and again until he gets the rest even in day light.

Ms. Mimi was excluded from the kitchen this morning, no cats or dogs allowed  It was time to extract the honey, strain it, bottle it and label the jars. That means huge potential for stickiness on door knobs, floors, worktops etc in fact in can be spread very quickly throughout the house. 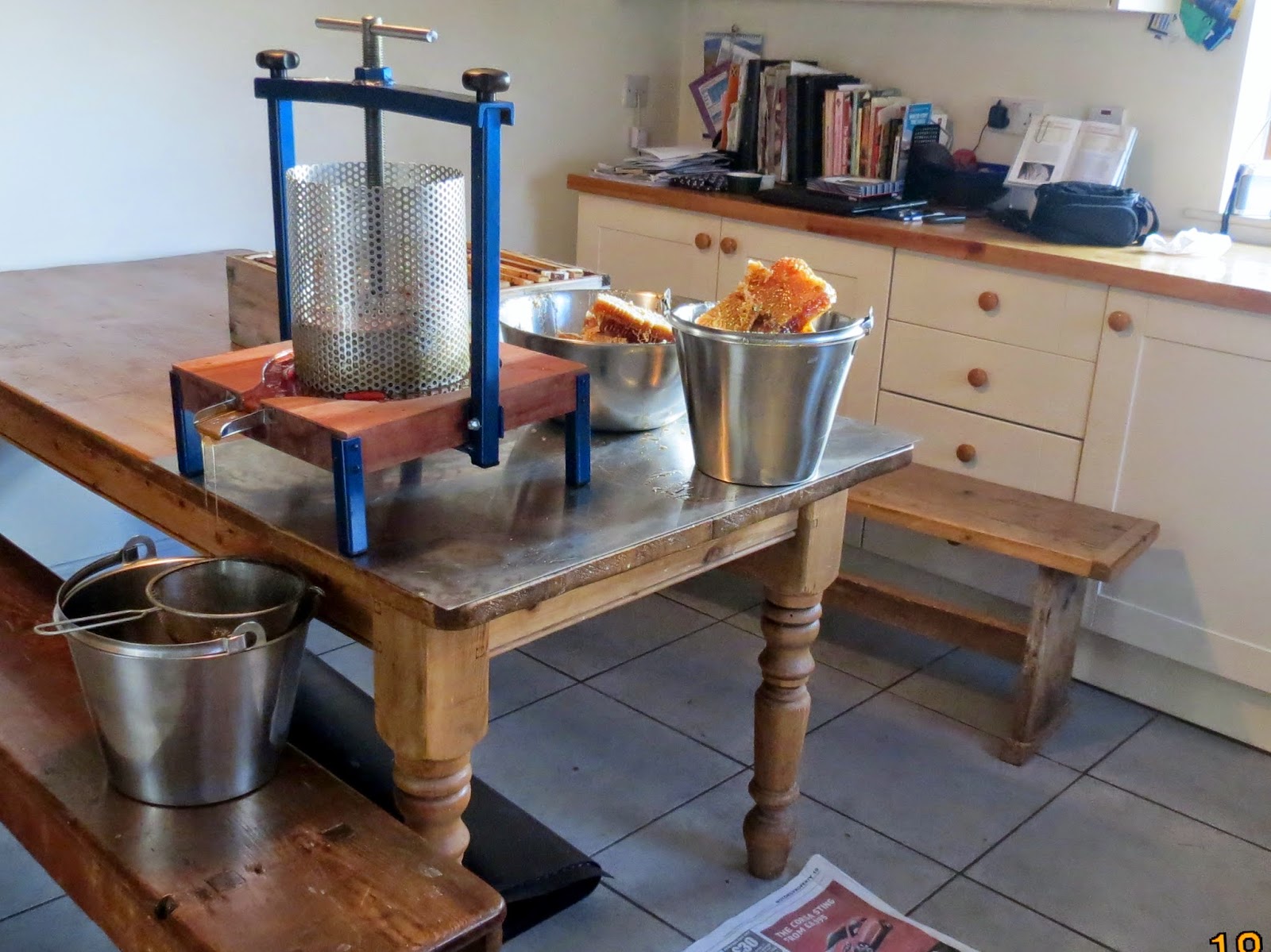 Most of the nectar was collected in late summer (August to late September) so there is a high proportion of heather honey in the usual flower mix and this means it doesn't flow very well. Normally flower honey can be spun out of the cells in a centrifugal extractor but heather honey needs to be pressed out.

The honey loaded cells are cut from the frame, put in a muslin bag then into the press.
as the screw turns honey is expelled through the stainless steel mesh sides, down to the trough in the base and then the spout into a sieve and finally a stainless steel bucket.

I always think that buying honey jars before the end of the season is tempting fate so I tend to re-cycle all kinds of glass jars with tightly sealed screw tops. After all its not for sale, its for family use and gifts for friends.
Posted by Tom Bryson at 12:42 No comments:

The things you see when you don't have a gun!

Two weeks ago my neighbour May had her two hens killed by a fox almost on her back door step while she watched. I have lost five hens to a fox in the last two weeks and have taken to letting the hens out later in the morning. Yesterday morning I smelled fox around the hen houses.

Last night I went out for a last look at the animals at 9.15 . There was a fox standing in the road about ten yards away watching me. When I came back with my gun he sloped off up the road. I missed him he was too quick.

This fox is quite tame and regular in its habits its been seen in the fields between 7.30 and 8.30 for several mornings. Is it an urban fox habituated to humans or just a naive youngster?

There have been reports in the newspapers of urban foxes being dumped in the countryside from Dartmoor to Derbyshire and Anglesey but I haven't heard of it happening in Scotland. Who would drive this far from Glasgow or Edinburgh with a stinking fox in their vehicle? They would have to be very dedicated.

No.... its a naive youngster looking for a territory and domestic poultry are an easy meal in the early morning or evening, they don't run fast and can barely fly.

Fox dumping will be confirmed as a  myth when the Daily Mail reports it as true!

Frenzied attack on the ewes? or over zealous marking? 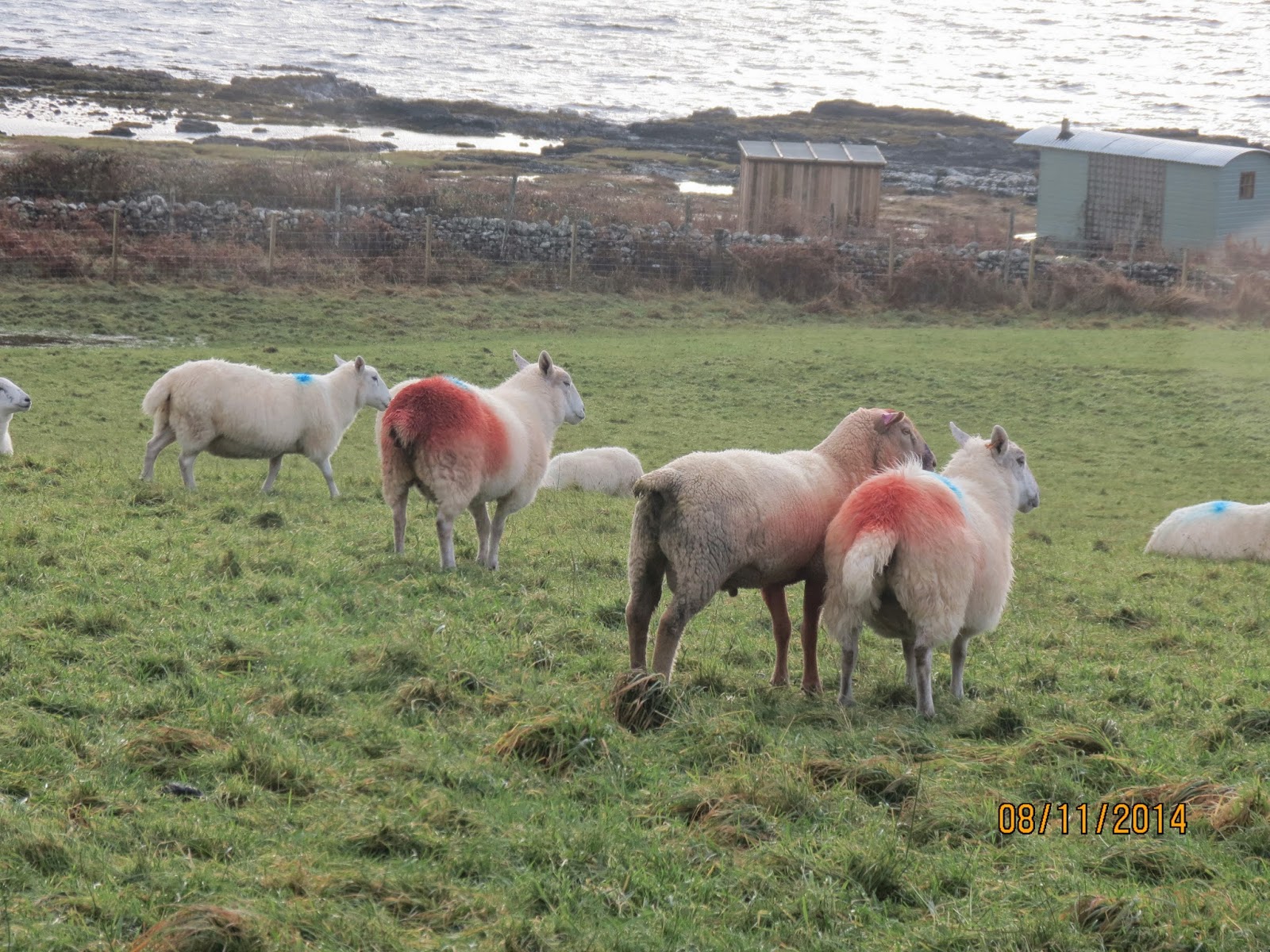 Anyone looking into the hay park this morning might think that there had bee a frenzied attack on the ewes, blood everywhere on at least four of them. Not so! I just used too much red keel. The tup went out among them yesterday and as you know from watching "Countryfile" and listening to "The Archers" its an aid to management if the tup marks each ewe as he mates with her.

Normally these days Shepherds use a leather harness fitted with a coloured crayon over the tup's breastbone but these things are cumbersome and must be uncomfortable. I prefer to use the old method, I mix up coloured powders chalk with cooking oil then apply it between the tup's forelegs with a stick. I was too enthusiastic. That's why it looks like a bloodbath.

Next time, in a couple of weeks I'll change the colour and be a bit more careful.
Posted by Tom Bryson at 03:20 No comments: