Industrialised agriculture in the UK began after WW2, until then we had traditional low input, low output farming, a time when farmers didn't have to keep accounts or pay income tax, yields were low, machines were powered by horses, weeds were removed with a hoe and wildlife generally flourished.

My childhood saw the horses replaced by tractors ( small grey ones mostly with motor car engines), combine harvesters replaced binders and threshers, this "mechanisation"  led to loss of habitat and enabled intensification. Then the widespread adoption of
fungicides, insecticides, herbicides and intensive use of nitrogen fertiliser on grass and arable crops in the late 60's led to widespread loss of birds, insects and flowers.

Even in the remoter livestock farming areas of the north and west intensification has resulted in a landscape of dark green fields ( because of high nitrogen fertiliser use)..... a deep green desert dominated by grass, cow parsley, stinging nettles and low diversity.

High diversity needs low soil fertility. When fertilisers are applied the more vigorous crop species and weeds out compete everything else..... result ......... loss of species.

But this week, in the Coquet Valley in North Northumberland we visited an island of colourful diversity in the sea of green..... Burradon Windyside Farm near Thropton. Here  Kevin Wharf has transformed what were once intensively managed barley fields into floristically rich meadows.

The change has been achieved quickly and effectively by using traditional grazing management, haymaking and broadcasting wild flower seeds. Sheep graze the fields during and immediately after lambing in the Spring. The fields are then shut up until late June  early July when a small scale seed harvester collects the flower seed then this is followed by making hay.

Why is this interesting?................. well you may have noticed that the UK is about to commit economic suicide by leaving the European Union. We farmers and Crofters are unlikely to get the level of subsidy enjoyed by farmers in member countries but our Minister for the environment has promised enhanced incentives for biodiversity creation and sustainable farming.  Kevin has shown how this could be done.

My brown egg laying hybrid hens lay an egg a day at the moment, there's over 14 hrs of daylight and it's warmer. So each day they go looking for a nest site for an hour or so then end up in the one they used yesterday.

Research shows that hens learn the best places to nest by mimicry. In this case the later laying pullets saw those that started to lay earlier using the hay racks and decided to use them themselves even if very over crowded.

This pre-laying behaviour can last for up to a couple of hours. Then having selected the nest they settle in to the nesting material and squirm about to make a comfortable bowl shape in the hay. The problem with this site is that the eggs sometimes roll through the bars and break. 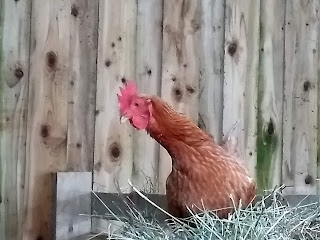 I did make a lid to keep them out but they were so frustrated I relented and let them in again. I just have to collect the eggs quickly.