I decided to get the hatching over with early this year so set 33 eggs (Bresse Gauloise) on 7th January. Today they hatched, 24 chicks from 33 eggs isn't bad (72%) considering they were sent from Germany so had to contend with temperature change, pressure changes and all that shaking about in the post. 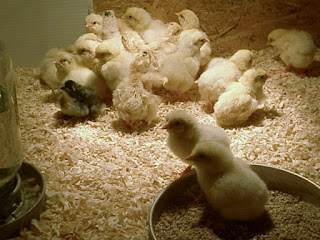 I seem to have 10 females and 14 males. How do I know that? I don't really but I was given a chick sexing device last month.Its a pair of magnets suspended on a string and I am sceptical.As soon as someone who isn't a Physicist starts talking about magnetic fields and forces scepticism kicks in. I need  evidence.

Jimmy who gave it to me sells the "Magnasexers" on Ebay and is convinced that they work on poultry, fish and humans.  You hold the egg in your hand and suspend the device just above the shell. If the magnet starts to rotate the embryo is female, if it swings back and forth it's male. So I did this on all 33 eggs then marked them M or F. When they were transferred to the hatcher from the incubator the F went in one side and the M in the other with a strip of plastic between them so that they could not get mixed up. The F chicks now have a black spot from an indelible marker on their heads.


You'll have to wait six weeks for the results. I'll be able to tell which are hens and which are cocks, when their feathers replace the down. May have to put coloured leg rings on one batch in case the ink wears off. There will be no statistical analysis at this stage ( I've forgotten how to do analysis of variance, there is not replication and you probably wouldn't be interested anyway). We will have a straightforward count of Ms and Fs.

There are pros and cons to hatching as early in the year as this. Its cold and dark and this affects fertility, more heat is needed for brooding and the chicks need to be well protected from draughts. There's a widely held belief too that you get more males with early hatches. However, as the chicks grow day length increases and peak daylight should coincide with these starting to lay in late June. The adult birds are also bigger than later hatched batches for some reason. In any case I want to get the hatching out of the way. One more batch of Ixworths next month, then a batch of geese for Christmas in March and I can put the incubator away until next year. 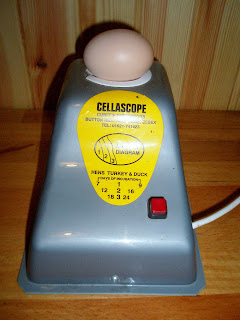 On average it takes 21 days for the fertilised egg to develop into a hatched chick in the incubator or under a broody hen. Unless you believe in the accuracy of the magnasexer you won't know how many of the eggs you set are fertile and have developing embryos until about day 6 when you candle them. The candler is a light source in a box with an egg shaped hole at the top and you use it in a darkened room.  Light passing through the egg illuminates the developing embryo. I candle my eggs after 6 or 7 days and take out the infertiles "clears", these can still be used for baking.

The incubator has to be kept at 37.5C until the chicks start to hatch when the temperature is reduced slightly because the chicks are creating their own heat.Just as important is the humidity. It should be low (40%) until the chicks start to hatch. They need to lose about 11 or 13% of their weight during the incubation period so that the air sac increases in size and the chick will have air to breathe until it breaks a hole in the shell, "pipping". I work out the average weight of each batch of eggs when it is set and then graph the ideal weight loss against actual weight loss once a week to make sure that the eggs are losing weight at the correct rate. In the graph below the rate of loss has been a little more than 11% so within the ideal range. 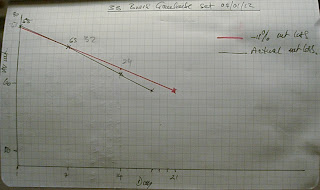 It took about 30 hours from start to finish of the hatching and the chicks are all in the brooder. This is a brooder especially designed for the Highlands. Its draught proof and vermin proof because I once lost a whole batch to a weasel that got through 10mm weldmesh to attack them. More about brooding and rearing next time.

Email ThisBlogThis!Share to TwitterShare to FacebookShare to Pinterest
Labels: Sceptic testing the Magnasexer

Tom, I remember the same technique being tested when Amanda was pregnant with Angus. Unfortunately I don't remember the prediction but I seem to remember the technique was used by a charlatan in Paris during the 19th century who made a fortune predicting the sex of unborn children. The key to his sucess - he offered your money back if he got it wrong, happy to work off a 50% profit margin.
Chris G
P.S. Re the picture, send my regards to the Magnasexer (whether he's in action or not).

I have kept and hatched many chickens over the last 30 years and if the chicken sports a wattle then depending on the size of the wattle when hatched or shortly after determines if it's a cock or hen. Hen chicks are undeveloped and cock chicks show a knobbly wattle. Always worked for me.

I also remember doing the technique when pregnant and I did it with a sewing needle attached to cotton. Can't remember if it was correct.

Tom, I read with interest your blog on chicken sexing and wondered if you were aware of the oddly titled "Mr Andoh's Pennine Diary: Memoirs of a Japanese Chicken Sexer in 1935 Hebden Bridge" Sounds like required reading for those occasional driech days in Ormsaigbeg.