Frank Fraser Darling was probably better know as an environmentalist but he started out as an agricultural adviser and farmer.During WW2 he farmed Tanera Mor in the Summer Isles and wrote technical articles on animal and crop husbandry in the Highland weekly newspapers. I have a copy of his collected essays published in 1945, its beautifully illustrated with black and white photographs like the one above.

" The Highland breed may be reckoned a beef breed primarily, but useful milkers can be found among them. One of the great advantages of Highland blood in the Crofter's cow is the placidity which is such a marked characteristic of the breed. It is much easier to be able to go out to the cow on pasture in summer time than to bring the cows into the byre and a good way of ensuring clean milk."

When Fraser Darling wrote this just about every croft had one or two milk cows. But in the mid-sixties  milk, butter and cheese became available in even the remotest crofting townships and the daily chore of milking was no longer necessary. Any cows that were kept on became suckler cows rearing one beef calf each year. Milking cows have all but disappeared. The only crofters I know who milk a cow are the Barbours at Strontian who keep a Jersey house cow.

If you want to grow your own dairy products in 2012 there is an alternative to the cow. You could keep two goats. Two because they are social animals and need a companion.

The best way to sell anything; goats, cars encyclopedias, is to concentrate on the positive points and deal with the objections as they arise. So here goes: Goats are delightful individualists, they will eat almost anything and can survive on land where cows would starve. Goats are much more efficient converters of concentrate feed 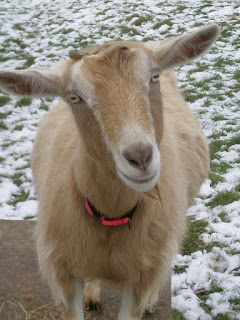 into milk. Milk production is about right for most families. You can freeze goats milk (its naturally homogenised ) ten kilos of milk will make a kilo cheese or over half a kilo of butter. They are small and altogether easier to handle.

Before Christmas our local further education organiser set up a short course on "Goat Keeping" the response was extraordinary a whole lot of people came out of the woodwork as potential goat keepers be it; milk and milk products, meat and fibre production or pygmy goats as pets. As a follow up we are holding a Sunday afternoon goat discussion with goat based meat dishes for lunch sometime in April. Its called, "The Crofter's Goat".
Posted by Tom Bryson at 06:29