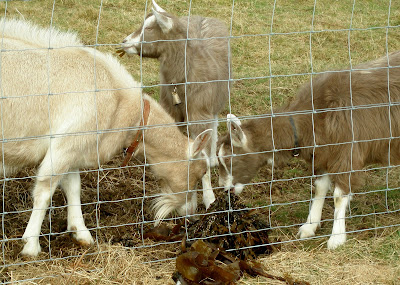 In winter the goats don't get much variety in their diet. They get as much hay as they can eat, some browsing on heather, rushes and bramble when they're on the hill; then vegetable peelings and leaves from time to time plus two feeds of concentrate a day. Fay Ogden suggested I walk them along the shore so that they could try the seaweed. After the last new moon and gale force winds there is a huge amount of kelp and other seaweeds along high water mark so I thought I'd do a seaweed tasting by bringing some home.  They seem to like both the bladder wrack and the kelp equally. But like most of my observations this one is totally unscientific.  Although it is low in digestible protein and energy seaweed contains a range of essential minerals and vitamins so it must do them some good and adds variety to the diet.

On North Ronaldsay (Orkney) sheep live almost exclusively on seaweed; for most of the year they range along the sea shore between low water mark and a high stone wall that keeps them out of the grass parks. Despite the plentiful supplies of seaweed around the coast it has not been important as a livestock feed perhaps because of the difficulty of harvesting and the low digestibility of its protein. Where it is used it is rinsed in fresh water, dried in the sun, washed again, treated with hydrochloric acid and then dried and ground to a meal to be incorporated into livestock rations. On the plus side its high in essential minerals ( extracted from seawater) and some vitamins.
Posted by Tom Bryson at 06:09