Cornish game - The Texels of the poultry world 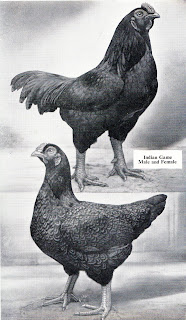 Texel sheep are seriously ugly, they look as if they just collided head on with a bus but they grow fast, have great meaty carcasses and the butchers like them. Cornish Game ( also known as Indian Game) are the feathered equivalent although definitely not ugly.

The breed has its origins in Cornwall during the 19th century. Breeders crossed the Red Aseel a pugnacious fighting cock with the Malay and Black Red game to produce a table bird of great quality. Built like a Japanese Sumo wrestler with a broad muscular chest, a good bone structure to carry a lot of flesh and a friendly temperament the Cornish Game became the meat breed of choice.

In the USA they developed a slightly smaller but equally meaty white version which in the 20th century provided the basic set of genes for the broiler chicken. Quantitative genetics, scientific breeding, commercial expertise and demand for cheap poultry meat signalled the end of big roasting chickens that were anything up to six months old at slaughter, broilers were cooked and eaten at three months old. Since then after perhaps 100 generations of selective breeding broilers arrive in your supermarket at nine weeks old. 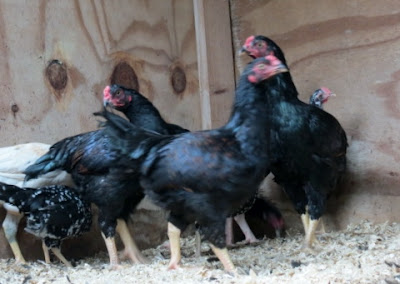 It is still possible to find good strains of Cornish if you want to taste real roast chicken or Coq au Vin. I was able to find some eggs, in Cornwall, earlier this year and these birds are now ten weeks old,  four cocks and three hens. Three cocks to eat and the best one for breeding next year.
Posted by Tom Bryson at 10:07