In north Northumberland last week I went looking for red squirrels. I spent an afternoon sitting in a woodland glade didn't get any photographs . However there were signs of their presence; warnings to motorists to slow down for them and spruce cones stripped of seeds. I didn't see any greys either, hopefully because of the control measures.

About 150 years ago grey squirrels were imported into the UK from America as a fashion item to grace the estates of the landed gentry. 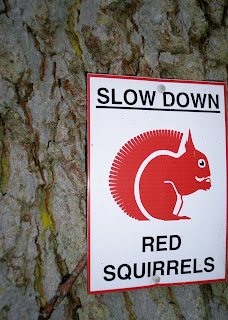 They have been very successful and now we have an estimated 2.5 million of these "tree rats" The native red squirrels with an estimated UK population of 10 - 15000 can't compete.

The greys store four times as much fat reserve for winter because they evolved to survive much tougher winters in the Eastern USA, they are more prolific and are adapted to living at hgher densities than the reds.So greys have displaced  reds throughout much of England and Wales and in recent years have moved north into Northumberland and the Scottish borders..

Bigger, stronger faster breeding greys also carry "squirrel pox" or  Parapoxvirus to which they are immune but it is fatal to reds.

The "European Squirrel Initiative" began in 2002 to remove the american aliens from the whole of Europe to protect biodiversity and prevent economic damage to woodland. "Northern Red Squirrels" grew out of this, it coordinates population mapping of both species and control of the greys.   www.northernredsquirrels.co.uk 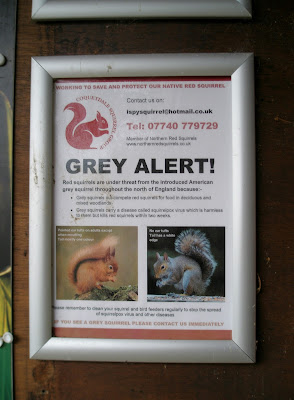 There used to be a bounty on the greys in the 1950s because they strip the bark from trees sometimes killing the tree directly or indirectly by opening up the tree to fungal infections. I think the bounty was 2/- ( two shillings in old money) per tail, an attractive payment for boys with air rifles. Now they are caught in baited cage traps and humanely disposed of.

More recently as pine martens have moved south into grey squirrel country it seems that they may be effective and selective predators on greys which feed more on the ground than reds. The reds can move fast high up in the tree canopy on flimsy branches where the pine martens can't follow.