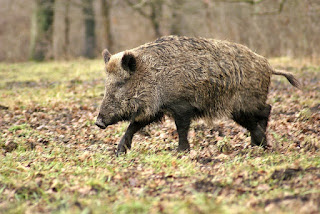 I thought that after days of rain we might see a hunting osprey yesterday, we didn't. But we did see evidence that a long lost ( since medieval times) keystone species is back. We saw real, fresh evidence of wild boar in the woodland. they had been digging, snuffling rootling and tootling in the grass surrounding the fishing lodge at the west end of the oak wood.

There is corroborating evidence from Glen Loy, an adjacent glen where trail camera video verified their presence. Wild boar in Glen Loy

In the UK wild boar come under the "Dangerous Wild Animal Act and if you want to keep them you are required to pen them behind chain link and electrified fences. However, these are highly intelligent and great escapers. Wild populations were established in the south of England  during the great storm of 1987 crashing trees brought down the fences. It's thought that these Scottish boar were originally escapees from the Glen Dessary estate to the north and west of Loch Arkaig.

It was estimated in 2010 that England has 1,300 wild boar in captivity and many thriving populations of boar living free in woods outside of the fences. In Scotland there were thought to be three wild populations. Distribution of wild boar in Scotland 2010

This is great news, a large mammal extinct in Scotland for over 600 years is back and doing its job of literally stirring up the place where it lives, playing a critical role in the ecological community. This is what a "keystone species" is. Like the keystone in a brick arch it holds everything together, remove it and the arch collapses.
Posted by Tom Bryson at 07:48