Do you remember an inn Miranda .........And the fleas that tease in the high Pyrenees

One hundred and fifty years ago Robert Louis Stevenson (according to me) started the adventure / travel  writing business with.... Travels with a donkey in the Cévennes. When, fifteen years ago we followed his route from Le Puy to Florac, I carried a copy with me that could still be used as a trail guide.

In the early 20 th century the Anglo-French writer, historian and traveller Hilaire Belloc set the pattern for future trail guides with his publication of, The Pyrenees, in 1909. Last night I sat down to read it. 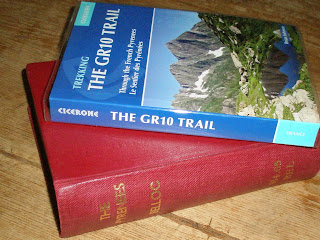 I couldn't help but compare it with, Trekking the GR 10 Trail, Le Sentier des Pyrenees published 100 years later in 2009. Both volumes include; how to get there, when to go, the weather, accommodation and walking routes with maps. But perhaps most interesting is Belloc's advice on what to take.

Belloc is an advocate of lightweight trekking and the bivouac rather than a tent where a bothy ( cabane) is not available. His kit list includes; a well designed backpack that hoists the weight high on your shoulders, a  gourd for wine, a blanket, matches wrapped in a waterproof pouch, a spirit stove and billy can. Enough food should be carried for at least three days, one and a half pounds of bread per person per day (French army rations at the time) and saucisson, two litres of wine in the gourd and that's it!

Clothing should be of wool, all of it! Walking on mule tracks in the mountains is much more comfortable according to Belloc when wearing rope soled sandals rather than leather boots, carry a stick, map and compass. We've gone back to wool, at least for a base layer now just about every corner of the world is mapped if only by Google.

Despite being an advocate of lightweight trekking Belloc includes a chapter on inns in the Pyrenees, one of which is also the subject of his best known poem.....Tarantella. The story of a wild night dancing and drinking at an inn during a festival at Canfranc in northern Spain. On the Tarantella Trail, Oli Foster, Times Literary Supplement

For the whole poem go to