UK Government rejects proposals to reintroduce lynx in England. .......It should be done properly....... in Scotland. 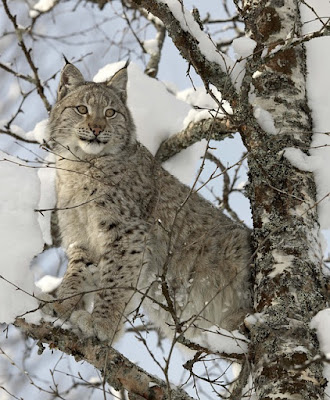 I can't remember ever agreeing with anything that the Michael Gove ( UK Environment Minister ) has said or done in this job or in his previous incarnations in government. But this time I have to agree with his grounds for rejecting plans to reintroduce European lynx into Kielder Forest. The application appears to have been both incompetent and shambolic, reversing roles. Normally it's the government who are shambolic, read this link.

If you want to re-introduce an extinct species you have to follow a well known set of IUCN (International Union for the Conservation of Nature) guidelines.  Among other things this protects the population that the re introductions come from and ensures that they will survive and thrive in their new home.

The project submission appears to have been cobbled together by a bunch of rank amateurs. Overall feasibility of the project is questioned. There's an apparent lack of clarity about funding, a lack of collaboration with local organisations particularly the Forestry Commission who's woodland it is. The impact of the proposals on local people and the lynx themselves have not been adequately addressed and the proposals for monitoring impact are inadequate.

Only once have I seen these beautiful big cats in the wild, I was walking up a trail on a Canadian river bank fifty years ago and came across a pair of lynx kittens sunbathing on a flat rock. I didn't have a camera with me which was good........I just watched them, then left quietly.

I am all in favour of reintroducing lynx to the British Isles but in the right place, with adequate funding, management by a competent body  and impact assessments on people, lynx and the environment. We could have a pilot project here on the Ardnamurchan Peninsula for example.