The UK and the EU after Brexit......... There's a simple solution to every human problem; it's neat, plausible and wrong. H.L.Mencken. 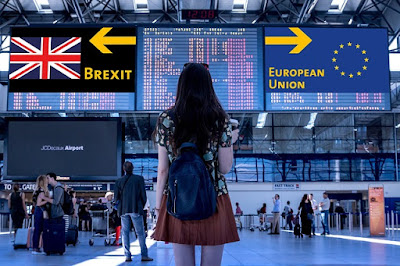 Last week 84 %  of this blog's readers lived in the USA, I know that thanks to Google, but I don't know why? you are obviously intelligent and discerning people so....

I thought that you might find it useful to have a brief explanation of our current political shambles in the UK and consequences of our leaving the European Union (EU) without an agreement on future arrangements between ourselves and our biggest trading partner.

While you are reading bear in mind my favourite aphorism of the late, great american H.L.Mencken.

" There's a simple solution to every human problem
it's neat, plausible and wrong"

The simple solution to the current UK problem of leaving the EU favoured by the loony right of the Conservative party ( mainly angry old men) and the even loonier, authoritarian English nationalist Brexit party is to leave the EU without any agreement on trade, the EU border between Ireland and  N. Ireland and freedom of movement. A complex problem but for Johnson there's a simple solution.... just walk away and all will be well.

Our current UK Prime Minister ( Alexander Boris Pfefell Johnson) is well known to be incompetent, lazy and mendacious from his early career as a journalist and his time as Mayor of London, our own "Mini Trump". It is obvious that he is aiming to take us out of the EU without a deal despite the awful economic consequences.

Johnson's wealthy backers see opportunities for "disaster capitalism" during the ensuing chaos . In the longer term their aim is to turn the UK into a low wage, low tax offshore  haven for money laundering and tax avoidance with minimal regulation of financial services and the environment.

All will not be well as many of our Members of Parliament who are meeting today to try to stop the , No Deal Brexit know. Thay have to do this before Johnson shuts down parliament on 14th September.

Because if we leave without a deal on October 31st........
I do have a dog in this fight as you may have realised. I am a Scot, living in Scotland where 62% of the population voted to remain in the EU at the referendum in 2016 . In this of course, we are ruled by our political masters ,in London.

My friend Derek sent me a comment today.,,,,,, Derek doesn't use Google, he's a one man stand against their bid for world domination! His comment is another quote by H.L.Mencken in his political commentary, "On politics, A carnival of bunkum".


"As democracy is perfected, the office of President represents more and more closely the soul of the people.  On some great and glorious day the plain folks of this land will reach their heart's desire at last the White House will be adorned by a downright moron."

This doesn't just apply to the White House of course, the quotation applies equally to No. 10 Downing Street .

NB
If you have nothing better to do:-

Here's a link to authoritarian nationalism
Posted by Tom Bryson at 02:36