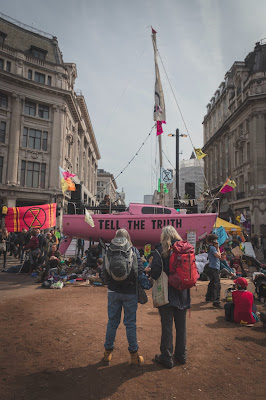 Because I support the aims and activities of Extinction Rebellion along with many other crumblies and their grand children. Who wouldn't, given the evidence on climate change and government inaction?...

Anti-terrorism police have produced a guide to recognising children and adults with, "anti-establishment" views and philosophy who might be keen to take part in non-violent protests in order to pressure government to introduce effective climate change mitigation measures, it's obviously aimed at XR.

So XR have been included in the secret policeman's handbook along with Neo-nazi and violent islamist organisations. Once you recognise these people you are asked to report them to the appropriate authorities. It looks like the thin end of a very authoritarian wedge.

How could anyone consider me "anti-establishment?  Possibly because I think of our new Prime Minister as a mendacious, indolent, incompetent narcissist but this is a perfectly reasonable assessment and a view held by over half of the population.

The cops haven't kicked my door in yet perhaps because their project has been widely revealed and criticised in today's newspapers.

In a rapid about turn they have said that they do not now regard XR members as violent extremists and their guidebook is to be recalled.