Lynx re-introduction to Scotland ........ Kintyre and E. Aberdeenshire the most suitable landscapes.

Fifty years ago on a hot, still, blackfly and mosquito infested afternoon  in northern Quebec I came across two lynx kittens sleeping in the sun on a big flat rock beside the Tonnancourt river. They were about two metres away. I watched them briefly and moved on, not wanting to disturb them. I didn't try to fish out my camera from the pack ....the moment was too precious for photos.  I still have a vivid recollection of the scene, it's better then any photograph and I've been a lynx enthusiast ever since.
Then five or so years ago I was really excited to read that the Lynx Trust was attempting to reintroduce lynx to the UK after an absence of 1,300 years.  Kielder Forest in N. Northumberland, the biggest man made forest in Europe with it's tree cover, remoteness and abundant roe deer was assumed to be suitable habitat. The project failed to get started.

If you are going to re-introduce an extinct species to an area you have to meet two essential ecological criteria; you have to ensure that the introduced animals have a good chance of surviving and multiplying and that the population you take the animals from is not damaged.  Just as importantly you need the support of all of the stakeholders, local and national. The Kielder proposal did not have this essential support.

So it was with some enthusiasm that I set off for Aberfoyle and a public consultation on the re-introduction of lynx to the Queen Elizabeth Forest Park near Loch Lomond.  There was no doubting the enthusiasm of the  organisers (Lynx Trust UK) and the dozen or so members of the public but the whole event was disappointing. ....... An introduction to put the case for lynx on this site would have been helpful along with scientific evidence of the suitability of the habitat;this didn't happen. The venue had dreadful acoustics and the Covid 19 social distancing didn't help. 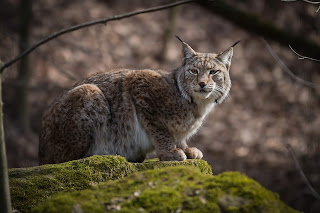 Meanwhile  some recent research in Scotland on the suitability of three large forests ( including Kielder) has been recently published. This research used computer modelling of lynx population dynamics, ecological, behavioural and landscape factors to rapidly assess the suitability of large predator habitat for re-introductions. The work concluded that Scotland;'s landscape is suitable for lynx re-introductions and tested the suitability of three forested sites; the Kintyre Peninsula, N.E. Cairngorms (Aberdeenshire) and the Scottish component of Kielder Forest. Of the three Kielder was found to be the least suitable, Kintyre and E. Aberdeenshire were most likely to be successful, Queen Elizabeth Forest Park wasn't mentioned. Ovenden, T.S et al Biological Conservation, 234, 2019, pp.140 - 153

If the Lynx Trust are to be successful they need to take note of this research and to have the support of local stakeholders (farmers, landowners, foresters and the public) plus national organisations, Scottish Wildlife Trust, Scottish Natural Heritage, Scottish Forestry and to be aware of the research quoted above. As for "consultation" this needs to be done in a structured way, in a suitable venue with a representative set of stakeholders or it is just a box ticking exercise by the organisers i.e. "we've done the consultation", perhaps?... but not in a fully representative, objective and methodical way.

For an authoritative view on lynx re-introduction have a look at this.......