Alpha males slog it out

I came home this evening to find the two alpha male cockerels , the Ixworth and the Bresse Gauloise slogging it out, toe to toe through the electric netting, oblivious of the 3000 volts.

There was blood and feathers everywhere as they pecked each others heads and raked with spurs. Neither was going to submit. Normally one backs down and struts away trying to keep his dignity intact. These two are too well matched. They would have fought to the death if the fence hadn't been there between them.

This can only be resolved by removing one of them who will have to be guest of honour at Sunday lunch.

Which is the most valuable? The Ixworth, Norfolk Boy  was hatched in 2010 so he'll soon be past it but he is very well bred. The BG is also well bred, hatched in 2011 and a suitable mate for the imported German pullets in the rearing pen. Which one is to be "Coq au Vin"?

I did do some running repairs with iodine spray and you can see from the picture that Asterix's companion looks concerned. 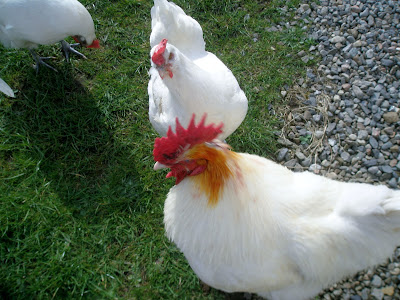 These birds are so well brought up they are not at all aggressive with people. \asterix did chase a jogger yesterday but he was only attention seeking or looking for food. Earlier in the week he saw off a black Labrador but was just protecting his hens.

I think the Ixworth will end up in the pot. 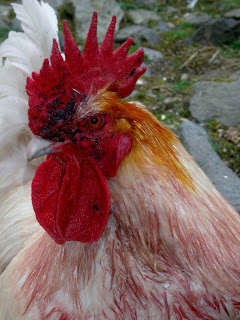