Bracken is the most widespread invasive weed in the highlands, it usually grows on the best drained most fertile hill soils, hence the old adage,” there’s gold under bracken, silver under gorse and copper under heather”. If eaten it’s poisonous to cattle, sheep, pigs and humans, shade from the fronds reduces biodiversity, it harbours deer ticks, grass productivity is reduced and the dead stems are a fire hazard in the Spring.  Hill farmers and Crofters eligible acreages for Single Farm Payment are being reduced in line with the area of bracken infesting their land…so how to control it? 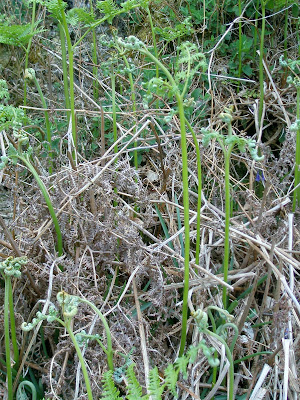 The EU has banned the use of Asulox (the most effective anti-bracken herbicide) once existing stocks on farms have been used up.  Cutting twice a year for three years is the most effective control measure so today the Austrian scythe has be in action again on the hill.

In the picture on the left you can just see the bracken fronds emerging through the litter of last years stems. I was once told that there are 40 tonnes of bracken rhizomes under every hectare of bracken, this is why it has to be cut twice a year for two or three years to kill it. 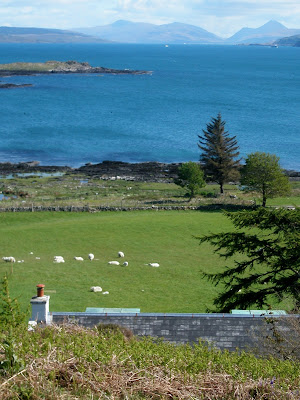 I have cleared 99% of it from the hay park in front of the house, four years ago it spread up to about 15m into the field but in today's picture below there is none and its time to continue with the hill park which I started last year. 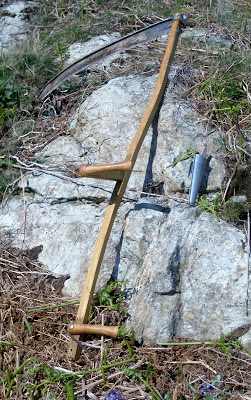 The Austrian scythe is the ideal tool for this job; its lighter, sharper and tougher than the traditional English scythe which is heavy, cumbersome and needs constant sharpening.  I only managed an hour and a half today as my hands need to harden up and its rather difficult to photograph oneself while scything.

The blade of the scythe on the left is hammered from a single piece of steel, this is the secret of its sharpness and light weight. The snath (handle) is ash with adjustable handles according to the mower's height and build. It needs sharpening about every ten minutes when cutting grass but can go on longer in bracken as there are fewer stems per metre square.and grass is very tough.

The mower carries his sharpening stone in a water filled metal pouch on his belt. There's no need for the enamel pail of water that I watched mowers use when I was a boy. The whole outfit is light and a delight to use. In the hands of an expert is can beat a strimmer at grass cutting and can be used all day. But more about the scythe some other time. Its worth a whole post to itself. 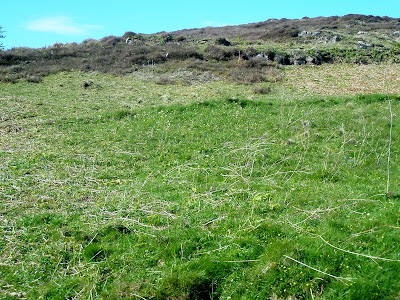 The area in the bottom half of this picture was cut twice last year and the bracken is well on its way out. The bit above is some of that cut today. 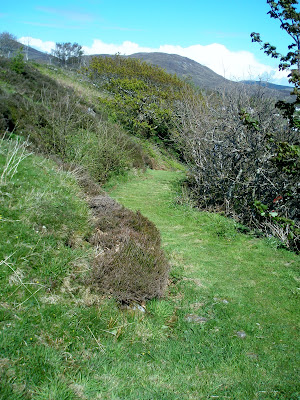 This old road to the hill grazing was impenetrable four years ago but the Austrian scythe has cleared the bracken and brambles.
Posted by Tom Bryson at 11:18

Andy,
I'm sure the "bracken bruiser" is effective but my croft is too small to justify a machine and I need the exercise.