Back in March the government rejected a call for a "precautionary moratorium" on the use of neonicotinoid insecticides which are widely believed to contribute to the decline in number and health of honey bee colonies. Here in W. Ardnamurchan there's no oilseed rape so no neonicotinoids to affect the bees by disrupting their ability to navigate back to their hive. The Government's failure to support a precautionary ban on these insecticides when they are banned in France, Germany and Italy is worse than disappointing, it shows total disregard for the precautionary principle. 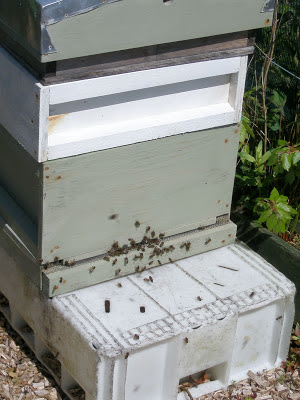 So here's my challenge...... if you can give me one example of an environmental problem that is not an unforeseen effect or unintended consequence of new technology you will win a prize of a dozen eggs. The eggs to be collected when you are here on holiday or delivered to the winner if living in Kilchoan.

I am confident that you cannot do this because in a capitalist economic system a business has to implement new technology as soon as possible in order to gain a competitive advantage.  Its also in the interest of the companies selling the new technology, Bayer in the case on neonicotinoids. As  a result the  "precautionary approach" to innovation is curtailed or ignored. The UK government isn't just the political front of the City of London, in the case of neonicotinoids its in cahoots with the farming and agrochemical industry.

Answers via the comments section please.

A volcano that spews out millions of tons of fine ash that covers a huge area of wild country causes an environmental disaster. As in Chile last year, most of the ash descended on Bariloche in Argentina. It covered everything in 6 inches of fine ash. Acidified the lakes and rivers and essentially killed m,ost things.
TP

Difficult one this. Is the environmental damage caused by volcanos, tsunamis, lightning and other naturally occurring events in the same category as an, "environmental problem"? Perhaps I should have posed the question differently," name an environmental problem ( other than the effects of natural events...volcanos etc)that has not been an unforeseen effect of new technology." I am losing my touch, to be fair you win 12 eggs.

The European Commission ha jut decided (24/05/13)to implement a two year ban on the use of neonicotinoid pesticides while further investigations are carried out. The UK cannot opt out Both the manufacturer (Bayer) and the NFU aid that there was not enough evidence for a ban. The EU ban is the precautionary approach in action.

The EU is definitely useful occasionally!

I'm gutted, was going to suggest the rapid population growth on the planet, but realised it wasn't anything to do with new technology and didn't submit it - so no eggs won, but will you be selling them on the roadside again from June 1st by any chance?

Global population per se isn't the problem it is the demand generated by more people and we have more people to a large extent because of technological advances in medicine, public health and agriculture. The overarching problem is exponential economic growth fueled by consumerism, capitalism (previously communism)and militarism. Like the people of Easter Island we are carelessly destroying our resource base and life support system. But then all species become extinct eventually.