A swarm in May is worth a load of hay. 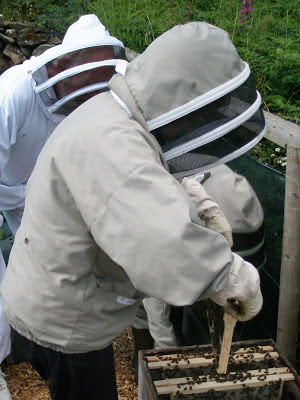 Last Thursday was warm, sunny and windless....perfect conditions for inspecting the bees. The majority of flying bees were out foraging and the bees themselves were in a good mood.

Despite the long cold winter, when we opened up the hives they were all in good shape. Each of the queens was laying because there were eggs, larvae and sealed brood. In the strongest colony there were sealed brood over seven frames. Its tempting to order a big batch of honey jars but a lot could go wrong between now and September.

The colonies will have to be inspected every week to see if they are making preparations to swarm.Now that we are into June if the current queen takes off with a high proportion of the colony then honey production will be down.

A swarm in May however might not be so bad if you catch it because they would still have time to build up and to produce some honey and a new colony. Hence the old saw," a swarm in May is worth a load of hay".

The colonies have probably come through the  winter in such good shape because; although February and March were cold months they were dry, they had a good supply of honey"stores" and good ventilation. Good ventilation is vital for all housed animals; bees, sheep, cattle, goats and poultry. Although we don't have varroa I use the wire mesh varroa control hive floors, these allow a better flow of air that carries moisture away from the wintering cluster of bees.
Posted by Tom Bryson at 01:07