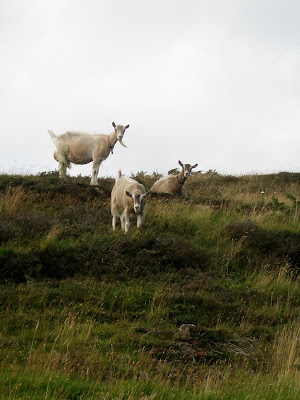 Usually goats become fertile at about four to six months old, some breeders mate them at seven months old to kid at one year old if they are heavy enough for their age. Acorn and Hebe will be two years and six months old at first mating this breeding season.

They are seasonal breeders coming into heat after the days shorten; when in early autumn they come into heat every three weeks. Decreasing daylight also brings the males (Bucks) into the rut; they get aggressive, eat badly and stay up late.

As we don't have a buck we have to recognise when the females are in oestrus so that we can take them to the buck at the appropriate time because the heat cycle only lasts for up to 48hrs. The signs are obvious; a lot of tail wagging, bleating and shouting, walking up and down, mounting other goats and a drop in milk yield because of the hormonal changes.

Having seen one heat we can predict the next in approximately 21 days and arrange to take them to a buck, the nearest Toggenburg bucks are at Bridge of Cally a five hour drive away, a bit far for "drive by mating" so we'll have to arrange some accommodation for them. More lurid detail of mating rituals then!
Posted by Tom Bryson at 01:01