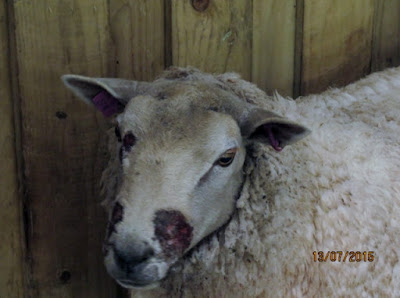 Our Charollais tup has had really nasty skin lesions on his muzzle. At first I thought,  "Orf" ( Contagious dermatitis) but it obviously wasn't contagious, non of the other sheep have developed the symptoms. I tried an antibiotic spray without much success and then it just got worse. Then just as you do before you go to a Doctor's appointment I looked it up on the web.

Dermatophilus congolensis sounded nasty enough; crusty skin rubbed off when it itches followed by a secondary infection. Its caused by a bacterium but it is spread by direct contact like orf

Today we got him penned up and the Vet had a look. She decided that it is probably an allergy to midge bites, the bites set up the reaction, the skin itches, the animal rubs and a secondary infection makes the exposed tissue red and ulcerated. So we are trying a heavy duty antibiotic by injection every two days for a week. It won't shift the allergy but it should deal with the deep seated infection. A dose of systemic insecticide might help to keep the midges away but I'm not optimistic.

He has produced some first class lambs and he has to go this year or he will be mating with his daughters. He'll be difficult to sell for breeding with his scarred face so will probably end up in pork pies and pet food.