A to Z of things to do in Kilchoan - Ragwort removal 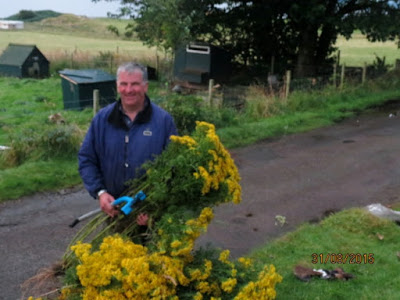 This was Dormouse's idea because she thinks that sometimes visitors may become bored. Under "R" for ragwort you can set about removing it just as Alasdair did this week. First you have to buy a highly specialised tool, ragwort remover ( see image) at the Waitrose garden department in Embra so it's not a cheap pastime. There is no shortage of ragwort in flower at this time of year and little danger of it becoming extinct.

For the last 100 years myths about the toxicity of ragwort abound. My favourite is that it is a "notifiable weed" i.e.. you should report it's occurrence to DEFRA, if this was true and people did it the machinery of DEFRA would grind to a halt because its everywhere.

The toxicity of ragwort isn't a myth but it does vary in severity. If plants are incorporated in hay and subsequently fed to livestock, particularly horses, poisoning can be acute and fatal. However recent research in the Netherlands has shown that goats and sheep must eat their own body weight of the stuff for it to kill them. This is highly unlikely as it has a very acrid taste apparently. I haven't tried it.

When I wrote about ragwort once before I was contacted by an irate entomologist who told me that ragwort is an essential food plant for the rare cinnabar moth and I was contributing to its demise by removing plants so I don't need to be told this again!