Fence post indicators of air pollution - Air quality is best in the west!

Wooden fence posts last about 20 years at most in this climate. They usually rot where they meet the soil surface. But towards the end of their upright life they start to rot from the top developing a little ecosystem of their own with mosses, lichens and grasses.

The commonest fence post moss is Heath star moss (Campylopus introflexus) it's an invasive species, the mossy equivalent of rhododendron, it got to Britain in the early 20 th century from the southern hemisphere  and is now found, on fence posts from the Scilly Isles to the Shetlands. Not just fence posts it's on the surface of peat bogs and my roof tiles.

Lichens are the shrubby type (Cladonia spp.)  a combination of algae and fungus growing together symbiotically. If you see them the air is clean as here in Lochaber. The algae in the symbiotic partnership are super sensitive to sulphur dioxide a major air pollutant in towns and towns and cities.

When I lived in Moscow the air was so polluted there were obviously no lichens, no mosses and only one species of insect (Faecal mosquitoes that lived in the drains) because the air was toxic like the air in London now.

So just another indicator of why it's best in the West. 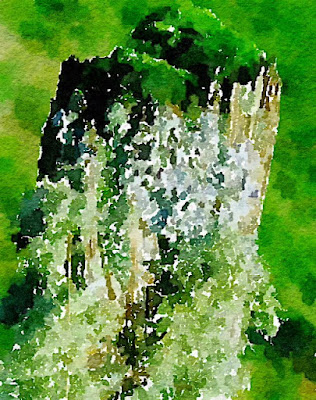 PS. I have just remembered there are two insects in Moscow, I forgot the cockroaches. They were not a problem because you could buy little cardboard boxes that you placed in cupboards  they contained something very nasty, radioactive polonium perhaps. These were known as "Cockroach hotels" like "Hotel California" the cockroaches checked in but never checked out.


PPS. the second pic is another of my cousin's high speed watercolours. He reads the blog in California, gets his paints out, does an impression of my photo and sends it to me. Its better than the original image I think.