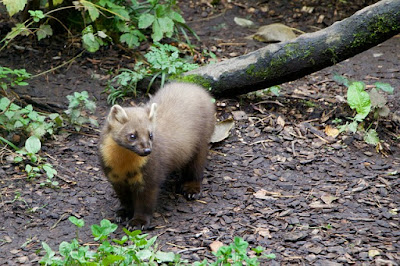 A couple of weeks ago I had a phone call from a friend in Northumberland, he'd just seen a pine marten at the side of the road as he was driving home. That happens all the time here in Ardnamurchan but Bob lives in England in the Coquet valley about fifteen miles south of the border. Pine martens were wiped out in England in the 19 th century.

The lambs were sold last week, the weather forecast for Northumberland was good and my neighbour was happy to look after the livestock. So a short scatological expedition to Northumberland looked good. Scatological because if I was looking for pine martens the only evidence I'd be likely to find would be pine marten scat.

Rowan trees are heavy with berries in September and pine martens love them, their scat is full of undigested skins and easily identifiable. Starting where Bob saw his pine marten I have been walking the logging roads and footpaths of the nearby woods for the past two days.

Wild mammals tend to take the line of least resistance to get from A to B, footpaths and forest roads or well used game trails. I'd be unlikely to see one in daylight and despite the rain the ground isn't soft enough for distinct tracks scat would be the only possibility.

There's plenty of evidence of foxes and deer but none of martens. I'll just have to keep trying if I find a trail they they are using I'll then setup the trail camera for a night or two. For more on tracking pine martens by someone more experienced than me have a look at the Vincent Wildlife Trust blog.Tracking pine martens

As I have been often told by archaeologists, " absence of evidence is not evidence of absence!".