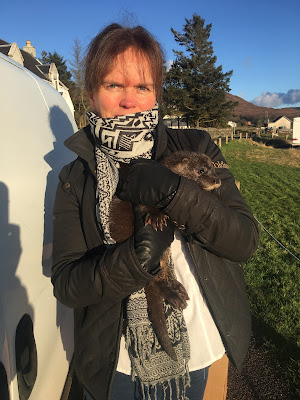 On Boxing Day one of my neighbours, Julie, was exercising her dog down on the beach. She came across a young otter on it's own by the tide line. It began to follow her and then she noticed it was dragging a hind leg.

Julie picked it up, took it home and called Hamsa. Hamsa called the Otter Refuge on Skye to arrange a pick up. He put it in a deep, dark cardboard box with a blanket for the night. Yesterday he handed it over to Ben Yoxon from IOSF (International Otter Survival Fund). What to do if you find an otter cub 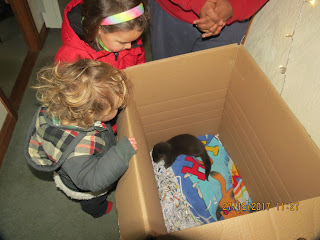 Julie and Hamsa did all of the right things. Young otters are totally dependent on parental care not just feeding but for protection from predators such as foxes and eagles. We did show the otter to my grand children but they didn't handle them, they are best left alone to recover , they do have very sharp teeth and of course we don't want them to become habituated to humans...... that could be  dangerous for them. But  if you hand someone a baby otter they can't help cuddling it. Luckily this one is friendly and doesn't bite.

I spoke to Ben Yoxon at the IOSF refuge this morning and he told that the cub is well, eating salmon and has an appointment with the Vet for an inspection of the leg infection. 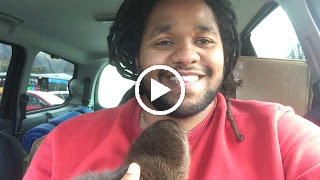 I spoke to Ben Yoxon at IOSF this morning and the otter is recovering well from a foot infection. It has a very healthy appetite for salmon.