Lunch with a roman god and some other stone work

The Cheviot hills with their wide horizons and old roads from holloways, through Roman military roads to more recent droving routes are wonderful walking country, these landscapes are also littered with stone artefacts from 2,000 years ago to more recent times.

Holloways pre-date the romans they are sunken paths  that tend to follow lines of least resistance between ancient settlements their surfaces worn down by centuries of travel on foot, by wheeled carts, the hooves of livestock and throughout their time by the erosive force of water. Some are so deep you can't see over the edges. They are still footpaths and rights of way in 2018.

Yesterday after a holloway and above a secondary Roman road branching off from Dere Street ( A highway from York into Scotland for the Romans) we had lunch in a rocky depression on the edge of moorland beside a stone image of Cocidius a roman warrior deity. 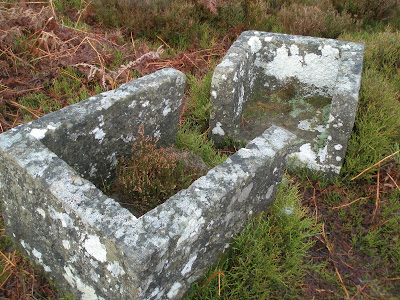 On the lower slopes of the moor there was a broken water trough hewn more recently from a huge block of sandstone. The rectangular block had to be quarried, dressed to about 1.5 m  x 60 cm x 60 cm then excavated and transported without power tools or a fork lift truck.

A "hogg hole " is more stonework. A hogg is a young female sheep and smaller than it's parent  Hogg holes were deliberately built into dry stone walls to allow sheep to shift themselves from one field to another. They are easily closed with a slab of stone or a hurdle.

Normally they are fairly simple structures with a flat lintel but this one is arched, a work of art really.

The Old Tracks through the Cheviots : Discovering the Archaeology of the Border Roads, David Jones with Coquetdale Community Archaeology, 2017, is available from www.northern-heritage.co.uk £14.99p. There is also a walking guide in preparation.