Many thanks to those of you who voted in support of the Coquetdale Red Squirrel Group funding bid with the AVIVA Community Fund ( 25/10/ 2018). Your votes got us through to the final but we failed to win the £10,000 needed. 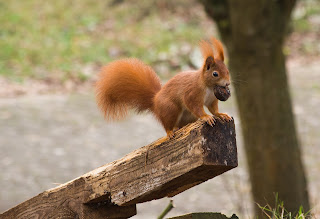 Feedback from the AVIVA judging panel said that the project was innovative and well presented. However it was too short ( 6 months) there were concerns over sustainability and ability to measure the impact. The proposals did not impact people and community directly! This is fair enough it is a "Community Fund" after all and AVIVA kindly gave us a £500 consolation prize. What next?

It looks as if we need to learn about crowd funding and appeal directly to the public with social media as there is the possibility of an apprentice scheme.  the Cumbria Wildlife Trust have two apprentices currently working on red squirrel conservation; doing surveys, data handling etc., this may be a possibility for the future.

In the meantime you may be interested in more stuff on red squirrels and the impact of pine martens in habitats where they co-exist. I may be guilty of over optimism about the positive effect of pine marten predation on grey squirrel populations where reds and greys coexist.

Some recent research indicates that pine martens eat quite a lot of red squirrels can make up 50% of their winter diet in some areas.  see this link..........Why the pine marten is not every red squirrel's best friend
Posted by Tom Bryson at 02:33