Environmental ethics in the age of fake news, oligarchy and moral relativism

Thirty years ago when The United States lead the world in the field of environmental ethics I had the opportunity to do a Masters degree in "Environmental Values".

Now with the world turned upside down and the USA  having won the race to the bottom in  valuing the environment, I wonder if it was worth the effort.

Back in 1989 I was a working farm manager with a science degree and an interest in the environment. It seemed to me that we knew the technical solutions to many of our environmental problems and that these problems were the unforeseen side effects of new technology, technologies which had been used without sufficient precaution. Studying environmental values might lead me to understand why we were so careless with the natural world. I was still rather naive and idealistic in my forties.

My first seminar in a philosophy department was a shock. The vocabulary often required resort to a dictionary, there were long and pregnant silences while people thought about the questions posed. It was a strange world, far from a science tutorial where we mainly dissected and critiqued scientific papers in front of the Prof. Gradually I got the idea, which was to discuss how the various theories  of ethics could and might be applied to the natural world.

We discussed the application of utilitarianism to the environment and it's underpinning of 20th century environment policy, animal welfare and even animal rights. Then Kant and, " The Golden Rule" which in it's crudest terms says you ought to do as you would be done unto. More up to date was  the american philosopher John Rawls and his notion of the ," Veil of ignorance"; he argued that policy ought to be made by policymakers assuming that they were completely ignorant of their own position, socially, culturally and financially in order to be completely fair. 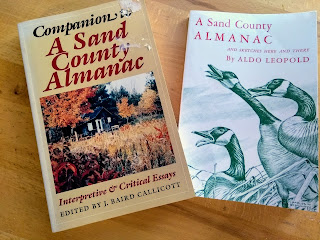 What appealed to me most was , The Land Ethic",  first outlined by Aldo Leopold  in his 1949 collection of essays, A Sand County Almanac". Leopold appealed to me probably because he was a scientist, manager and wonderful writer. His ethos was ecologically based, he rejected the human centred approach of utilitarianism and argued that we need a new relationship with land, animals, plants and ecosystems. The real philosophers concentrated on arguing that there was no real philosophical foundation to his ethic it was basically romantic ecology. I think that's why it appealed to me and the US National Park Service who underpinned their management for three decades with Leopold's ethic.

At the end of two years studying I felt that some of my questions had been answered but far more had been raised.  The important thing is that we were discussing our values and the environment and how we might save and preserve ecosystems, species, rivers and mountains.

I can't imagine that happening in today's White House or No. 10 Downing Street where politicians and the people who fund them are taking us to "hell in a handcart" . As for the Masters course, it's long gone.

Tom,
Great that you mention A Sand County Almanac - I have exactly the same edition - purchased from the little bookshop in Wye in about 1985. It was on Bryn Green's ecology course reading list - and it has remained a firm favourite of mine and one of the most inspiring books on my bookshelves. Every time I read it, I feel a great debt of gratitude to Bryn for recommending it. Aldo Leopold just writes so passionately and lucidly.