Travels with a donkey......La Route Stevenson

It's the 14th November and already this month I have filled the water butt with a hosepipe for the livestock  three times.  It's been unusually  dry for three weeks,  at a time when we are normally deluged., the sun is shining in a cloudless sky and it's 4 degrees outside.

Thoughts turn to summer 2020, France and a walking holiday but this time with a difference.....I want to take donkey.
A long walk in the Pyrenees without a donkey

Robert Louis Stevenson is  perhaps most famous for his novels Treasure Island and Kidnapped. He may be less well known as a pioneer travel and outdoor writer. "Travels with a donkey in the Cevennes", written in 1879 was one of his first outdoor books, an account of his 120 mile walk with the donkey Modestine from Le Puy to St. Jean du Gard through the Cevennes.

Modestine was his essential pack animal because he didn't travel light his heavy extra large sleeping
bag was made of sheepskins, he took wine, brandy, a leg of mutton and a revolver he really needed a donkey. We don't really need one, we travel light and unarmed, overnight baggage can go by courier van to the next stopover. I just like the idea of an asinine companion.

RLS cursed Modestine roundly every day and  he goaded her with a stick; she was too slow and stubborn, he didn't realise that she was on heat for at least part of the time. In 2020 a hired donkey should, I hope be more amenable as long as the donkey driver follows some basic rules. Don't overload her, don't creep up on her from behind especially when she is eating corn, don't try to stroke her face her shoulder or neck are are preferable.

At the end of their trek in St. Jean du Gard RLS was sad to see her go when he sold her and described her thus....


She was patient, elegant in form, the colour of an ideal mouse, and inimitably small.
Her faults were those of her age and sex; her virtues were her own. 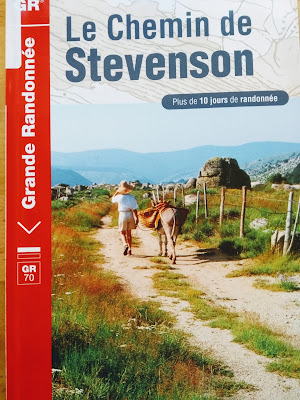 My walking companion an experienced horsewoman is more practical than me and thinks that a donkey may be more trouble than it's worth. I'll have to work on this.

"The Route Stevenson" the GR 7 follows Stevenson's route closely and the original book, only 176 pages in the copy that I have , could be used as a guide but my map reading is never brilliant so I've bought the french Topo Guide, it's detailed and the maps are excellent...... we'll take both!

While planning I also have to bear in mind that I am now a "crumbly" (over 75 years) and I think we should do one half in the early summer and if we do the second half... in the autumn. The stages will be shorter than those of the GR7, the accommodation comfortable and the baggage goes by van.  This is as a result of my biting off more than I could chew on the GR10 in 2018.

The best Gites d'Etapes are fine but mountain huts are out and in some places hotels and inns will be used. It has taken me a rather long time to realise that  it's worth paying for a good bed with en-suite bathroom. Food is normally excellent everywhere except in mountain huts.
A summer in the Pyrenees