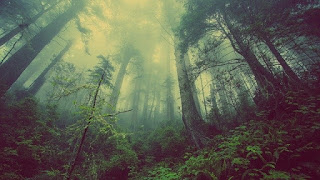 It's the open season for hunting Roe bucks , it starts on April Fools day and ends on 31st October  Halloween. So tomorrow morning out in the woods along the loch there'll be a stalker hoping to shoot one, perhaps for a trophy head, to top up the freezer or to keep the deer population under control or a combination of all three. I hope to be out there myself soon at first light around 4.30 am. Legally we can only shoot deer between one hour before sunrise  and one hour after sunset, the lawyers definition of night.

Today in my newspaper, The Guardian, there was a report that the British Government is to accept the notion that animals are sentient. In other words most animals have cognitive ability and therefore feelings or sentience and we have a moral obligation to protect them from suffering. I totally agree with this.  So.... why do I shoot wild animals?  There is a number of reasons and if I'm honest with myself it's not entirely in order to conserve other species. Scotland's deer population has doubled in the last 50 years and in places this has had a  devastating effect on biodiversity.

Also today there was a report of a wolf cull in Utah where the State government, in response to the appeals of ranchers are planning to kill 90% of the population because wolves are said kill  a few lambs. As a result  gangs of unlicensed hunters have been pursuing wolves on snowmobiles using gps and a range of high tech equipment to kill them. They sound more like armed hoodlums.

Is there any difference between my deer stalking and these "cowboy hunters". I think that there is, but you probably don't think it's a sufficient justification; but the wolves are the top predators they may kill a few lambs but they also keep the elk and deer populations in check and preserve biodiversity. If we had wolves here we might not be able to justify deer shooting so readily. 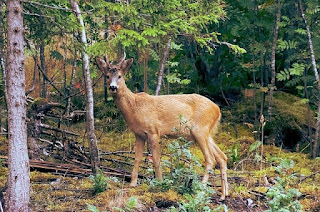 I have to admit that I love being out in the woods at dawn, it's an adventure and I get some satisfaction from shooting well and killing deer humanely and we eat the venison and I'm not really into trophy hunting. My project during covid lockdown has been to learn as much about deer as possible, their ecology, biology and behaviour, the law relating to stalking, gun safety and humane shooting. This weekend I'm off down to South Ayrshire to have this knowledge and my shooting ability assessed. If I'm knowledgeable enough, if I can identify our six deer species in a range of situations and shoot straight I'll be a awarded the Deer Stalking Certificate level 1.  We''ll see....... it's one thing to get a one inch ( 1 moa) group at 100 yds on the range and quite another in simulated hunting conditions with a critical audience.