Deer stalking in Scotland........necessary and humane


Just before the first Covid19 lockdown in March last year  I posted a blog about Scotland having too many deer after a doubling of our deer population in the last 60 years Too many deer.... too few trees . Since then before our latest lockdown I've been deer stalking ( hunting in N. America and Europe) for the first time in fifty years.. The last time was hunting moose in Abitibi, northern Quebec in the late 60s. Why? ..... well I thoroughly enjoyed the days in the bush, camping , canoeing and watching wildlife in the pre-dawn northwoods, it was a great adventure so I thought I'd give it a go again  in Scotland.

There are two main types of deer in this country, red and roe, both are indigenous and have been here since the last ice age. There are non-natives too; fallow and sika but red and roe make up the vast majority. These wild deer belong to no one but that doesn't mean you can just go out and shoot them. In law they belong to the owner of the land where they are shot.  So in practice they belong to estate owners, farmers and the State forestry organisation Forestry Scotland who can either keep the stalking rights for themselves or lease them to hunters.

The red deer by and large live on the open mountains and are the larger of the two species,  a mature male (stag) weighing in at around 200 kg live weight and around 100 kg as a carcass. The stalker can't carry a deer carcass on his back down a mountain side and several kilometres back to the larder so it becomes something of a logistics exercise and calls for back up.

Some estates still use ponies with the deer tied on their backs but in most places ponies have been replaced by eight wheeler go anywhere argocats. Unless you own the estate if you want to hunt red deer you'll be accompanied by a professional stalker and you'll have to pay perhaps £600 to shoot an average stag. The stalker will guide you to the stag after first seeing if you can shoot with a large bore rifle, on the range. He ( or she these days) will, after breakfast , get you as close to the quarry as possible to ensure a humane kill, then eviscerate the animal ( gralloch ) and get you and the deer safely down the mountain again.

Roe stalking is different, You start before dawn or in mid-afternoon  hunting slowly and quietly upwind along the forest edge where the roe are feeding. The bucks are stalked in summer from April to the end of October  and the does from mid October until the end of March. If you have the stalking rights and you have the skill and experience you can hunt alone or as with the reds a professional can guide you. This might cost you from £80 to £180 per stalk depending on it being a buck or a doe and then there's usually extra for a trophy head .  The roe carcass is much smaller than the red and can be packed out on the hunter's back in a rucksack  lined with washable plastic after the gralloch.

Last week I had two morning stalks with a professional and two afternoon/ evening still hunts from a high seat about 12 feet above the ground as I have always wanted to try both methods. I was assured by Rab the stalker on the second day that walking was generally much more successful.

Now most of you are going to disapprove of this and I can understand why; these are beautiful animals and we don't need to kill them for meat or trophies. But as I argued last March we have too many deer and the population has to be managed by killing deer as humanely as possible. If you eat beef, pork, lamb and poultry these animals have to be killed too and it's often done less humanely after a  life in inhumane conditions. 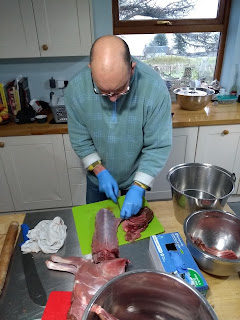 The hunters I know give the highest priority to accurate shooting and quick humane killing. They also eat the venison and are not very interested in trophies. After all, it wasn't their efforts that grew the largest antlers it was a combination of environment and genetics.

Since I posted the above in December last year there have been some important developments. A "Deer Working Group" has reported to the Scottish Government with a list of 99 recommendations for the future of deer management. The priority seems to be large reduction of the national deer population.

The current open season for red deer hinds runs from 22nd October until 15th February, it is when a large proportion of the females are culled. This is a huge potential animal welfare problem at both ends of the season. If shooting females runs into April for example large numbers of heavily pregnant hinds will be killed; they calve in June! This would  also result the starvation and slow death of orphaned calves in the autumn and at the end of the winter.

Stags are currently shot between early July and 21st October, the Committee recommends year round shooting of stags which along with unregulated night-time shooting could mean more poaching but reducing the number of stags will have little effect on the overall population.

We do have too many deer and a smaller population would result in greater bio-diversity, fewer problems for foresters and a reduction in road accidents but there isn't a simple solution.

It's neat, plausible and wrong!"

Tom,
I hope the stalking was satisfying and the venison even better. In my view, if you eat meat, then you have to be prepared to accept the respectful killing, cleaning and butchering of the caracse. Like you, I think that a clean kill on the hill or in the forest is far more humane than being herded into a slaughterhouse reeking of blood.

There's a Parts Unknown episode on Netflix that is about Scotland. Anthony Bourdain & A A Gill stalking on a Scottish estate. They still used ponies. It's worth watching. Can't remember which series so you have to hunt through the episode listings if you're interested (and have Netflix).

I’m with you, if they need to be culled (because we have removed their predators) then it is important it is done humanely, and that the resultant carcass should not be wasted.