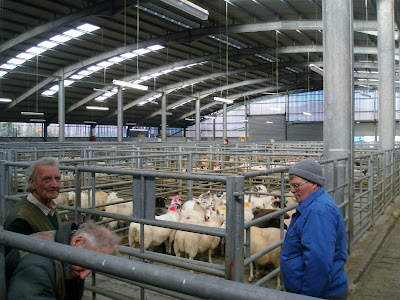 Another day at the livestock auction this time it was our old "cast" ewes. They are sold largely because of age; missing teeth, infertility and loss of one or both sides of the udder because of mastitis. I once met a Farmer in Hampshire who went out of her way to buy toothless but otherwise fit ewes because they were cheap and she looked after them well enough to make it profitable, she called them "grass suckers".

We  don't get much for them but as my neighbour observed, "its better than having to dig a hole for them if they don't make it through the winter". The Auctioneer's cheque just covered the cost of fuel and topping up the tank. We had a conversation about where these ewes or parts of them end up; meat pies, pet food and possibly ice cream.

There were older ewes for sale who had all of their teeth and two working teats these were bought as "correct" as opposed to "cast" and will probably give the new owners another crop or two of lambs.
Posted by Tom Bryson at 09:11