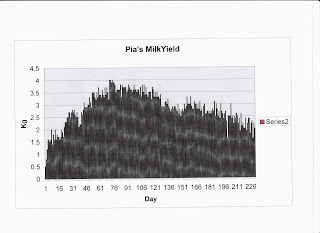 Its eight months since Pia kidded and started milking, during this time (240 days) she has yielded 650kgs of milk. Its quite remarkable for an animal weighing about 70 kg. If things go to plan she'll milk until the end of the year (300 days) and will have produced somewhere between 730 and 750 kg in her first lactation; three quarters of a tonne of milk.

Ideally she'll be dried off around day 300 and will have two months rest before she kids and starts milking again. The dry period is  an opportunity to lay down some subcutaneous fat because during the early weeks of lactation she cannot take in enough food to support production. The fat on her back is a store of energy to be mobilised when its needed.

On the graph you can see quite a lot of daily variation in yield. This is biological stuff, you don't get straight lines and smooth curves. Differences between days are probably due to; the quality and quantity of  forage and the weather; on cold wet days when they are outside the goats would rather stay inside their hut than go foraging so nutrient intake is lower and milk yield is lower as a result.

This is nothing compared with the yield of Moonlin Dialara in  an extended lactation ( over 300 days); she produced 5,478kg in her last officially recorded lactation reported in the BGS Journal last month.
Posted by Tom Bryson at 04:30