Living with a septic tank : Don't put anything in the toilet bowl unless you have previously eaten it. 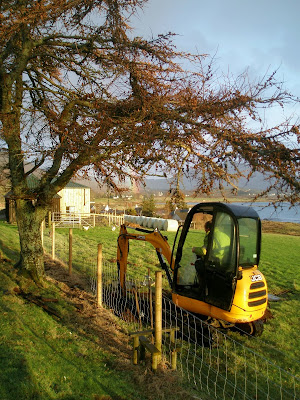 There is a downside to country living and its to do with drains. Every country house I've lived in I have ended up with my head in the septic tank. The reasons are legion;  bad design, no design, disposable nappies (diapers) and cooking fat are the most common causes.

Returning home from Christmas I discovered that the drains were blocked. this is not difficult when the stuff is welling up around your feet.

Yesterday was spent in diagnosing the problem. After much swearing, splashing about and digging we decided that the blockage was between the inspection hatch and the tank. The solution would be to rod the pipe from the tank end if we could find the outlet. This was difficult to find as I believe in not interfering with nature ( septic or otherwise) and leave the system to its own devices. This has worked well for the last five years but a digger was needed now.

Today Hughie brought the mini digger and we unearthed the access point. After more swearing, splashing and rodding we provoked  a geyser of shit with a plug of congealed fat on top.... job done.
Posted by Tom Bryson at 10:24