"Love of Country- A Hebridean Journey" a short book review 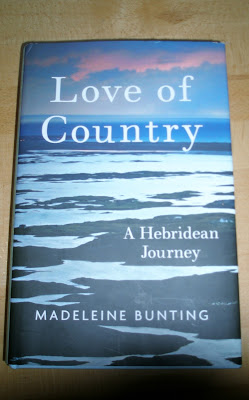 Coming home this afternoon on the Calmac ferry, "Raasay" the boat rumbled and stuttered across the cold black water of the Sound the shore obscured fore and aft by fog. the perfect atmosphere for finishing my Christmas book the narrative of a pilgrimage from Arran down north to the Butt of Lewis and St. Kilda.

"Down north" because that was how the Gaels saw the geography of the Hebridean archipelago. Unlike Mercator's projection with North at the top their map was rotated clockwise through ninety degrees with the isles of the west strung out from Eire on the left to Lewis on the right. Mainland Scotland was a mere outline at the bottom. Not many people know that, I certainly did not.

Six years of exploration went into this book, the result - a sensitive and perceptive treatment of  other writers from Dr. Johnson, to George Orwell, the tragedy of the clearances which in the 21st century might be called ethnic cleansing and the meaning of home.

It's the ideal companion and guidebook to the history, culture and rugged landscapes at the Atlantic edge .  A "Lonely Planet or Rough Guide" it isn't.  Don't travel here without it.

Love of Country - A Hebridean Journey by Madeleine Bunting, GRANTA, 2016