The byre finished at last.......well almost.

The outside is finished, now I have to complete the interior but that's another story. The images are in chronological order. I should add that the project was completed with the skilled help of Jamie Santus (Joiner, Achosnich) I did the labouring and unskilled stuff. 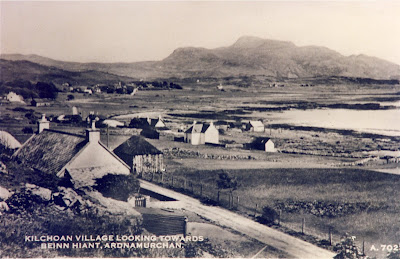 This postcard of the village of Kilchoan was probably made in the late 1940s. The byre is just below the house on and  the right. The walls are clad with wood, the roof consists of sarking covered with roofing felt.My neighbour Alistair Cameron thinks that the byre was built in the early 1930s. 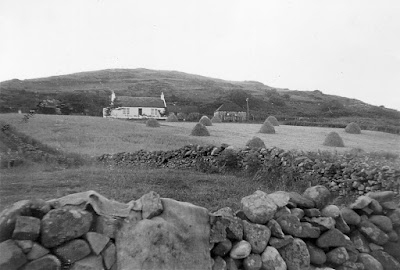 Taken in the 1950s by Alistair this shows Craigard and the byre probably in July/August (haymaking). The byre was still substantially the same as in the 1940s and housed two cows and their calves in winter.The house has since had dormer windows added and a large kitchen on the west end of the house. No "Hydro"poles for electricity; oil lamps and generators were the only source of lighting. 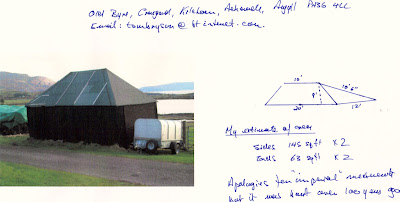 September 2010 the byre before the Dec 2011 gale removed the roofing felt. Walls were clad with "wriggly tin" or rusty, holey corrugated iron after rain the interior was soaking and the wooden structure in danger of rotting.

Doodles are my working out of the materials needed. It was the December gale that motivated me to get on with the job. 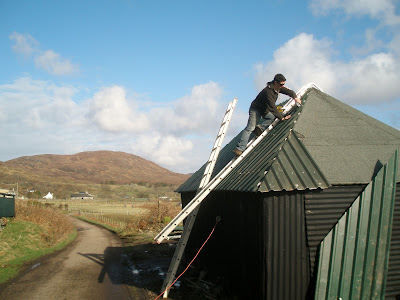 Jamie fixing the re-cycled box profile roofing sheets that were originally on the Sonachan Hotel laundry. We added dwangs (purlins) inside to fix the sheets to through the remaining felt and sarking. 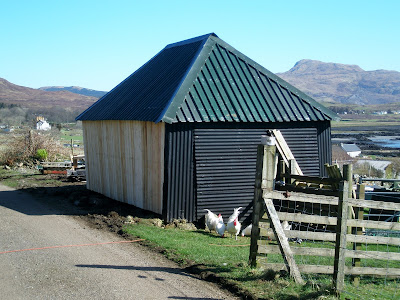 We gradually replaced the rusty, holey wriggly tin with boarding. Because of the power of the wind here we didn't want to leave the building completely open. The cedar boards were harvested from the road widening site at Drynie Hill, milled by Sandy MacDonald at Ardslignish. The cedar trees themselves were planted for Queen Victoria's Jubilee. 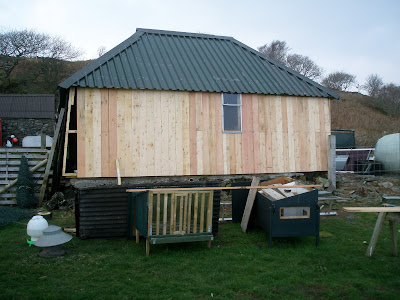 The west end of the south wall was slightly put of true, about ten degrees so once the two long walls were boarded we removed the west wall and rebuilt it as near perpendicular as possible. 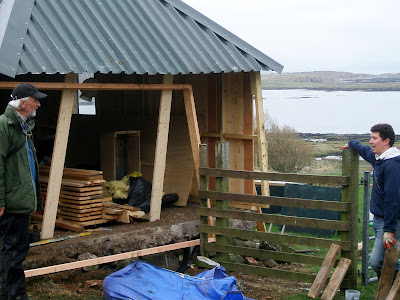 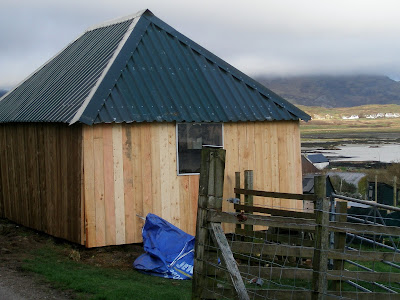 West wall complete but we did manage to construct an optical illusion......it all seems perpendicular if you drive or walk quickly past it. Once the creosote and tar are on the illusion will be complete. 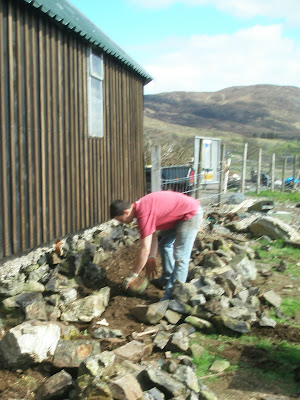 Doing the foundation last.....the stone base had been eroded and the floor undermined over the years. The solution  was a dry stone wall and buttress ( well almost dry, we used some concrete). 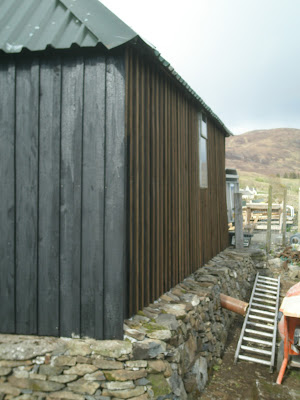 The quality of the walling is supposed to distract you from the lack of perpendicularity of the byre wall. I will replace this pic after I have cleared the tools and debris away. 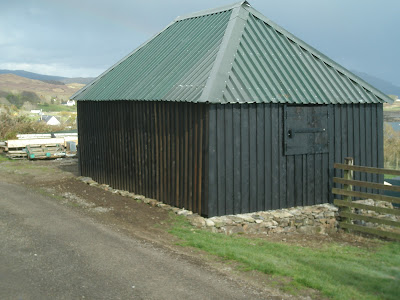 April 24th and almost finished....only one more coat of bitumen paint to go on. 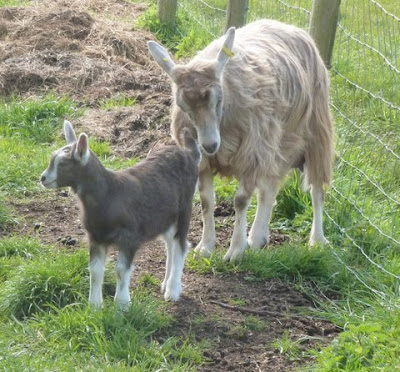 Finally ........this is one of the future occupants, the Toggenburg kid "Acorn". She is just over a month old but won't arrive until September.