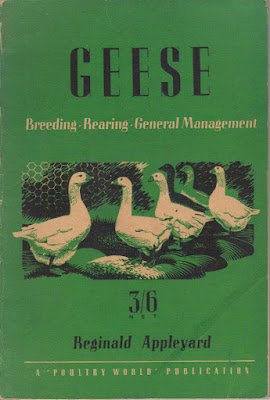 Old books on farming topics are a mine of practical information and an insight into how things were done 70 or 80 years ago. It was this book by Reginald Appleyard (remember him?......he was the breeder of the original Ixworth fowl) that told me what to do with spraddle legged goslings.

He gives instructions for hatching geese under broody hens, five eggs per hen .....and this was commercial production!. "Michaelmas Geese" or "Green geese" were killed in September/October after a summer fattening on grass. "Christmas Geese" were a different matter, they needed extra labour and expense for food, skimmed milk, buttermilk even turnips were used as fattening rations. This produced an 18 lb (7kg) carcass. Ours will be green geese, killed, plucked and cleaned and into the freezer in September for Christmas eating. I don't know what we'd do with a 7kg goose.

These, "how to do it" books were often produced by trade magazines, "Poultry World" as in this case. The cost was defrayed by including adverts like the one below. Poultry World still is the industry trade paper. 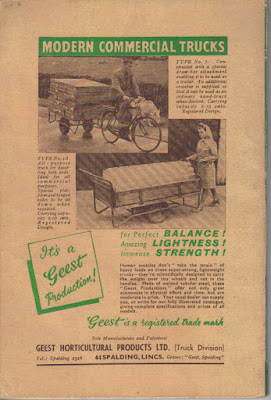 In the 1940s people presumably saw bicycle powered farm transport as normal together with huge wheelbarrows for ladies. Its a long way from Adam Henson's JCB four wheel drive farm buggy..... and control of poultry production by multi-national corporations.

One surprise is that he doesn't seem concerned about predation of free range geese kept outdoors without housing, but it would take an unusual fox to tackle an adult gander. I'm not so sure about pine martens though.

For those  born after 1970, 3/6d ( three shillings and sixpence) is 17 pence, well actually seventeen and a half pence but I don't know how to do halves on the computer.