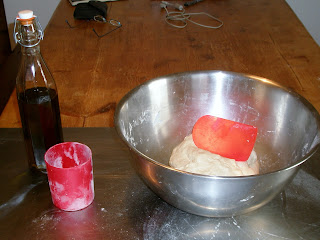 Crofting is about producing high quality food for local consumption, in this case my consumption. This is an alternative to the factory loaf and to the too precious bread recipes of TV chefs. You can bake two white loaves with about 20 mins of activity over three hours while doing other stuff like the laundry as this keeps the kitchen nice an humid for the yeast; here goes....Mix together 1200g strong white flour, two teaspoons full of dried yeast, three teaspoons of sugar and three teaspoons of salt. Add 720g water at blood heat together two tablespoons of olive oil. 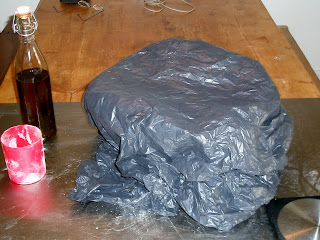 Knead the mix in the bowl until it doesn't stick to your hands, about 6mins. Time elapsed so far 8mins.
Place bowl in a garbage bag in a warm place until the dough has at least doubled in size.( About one and a half hours) 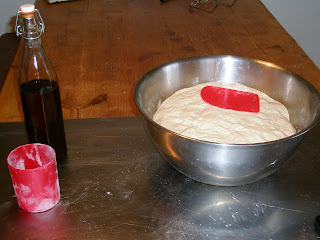 Turn the dough out and knock back ( knead quickly for a few seconds). Divide dough into two 1000g pieces and shape to fit bread tins 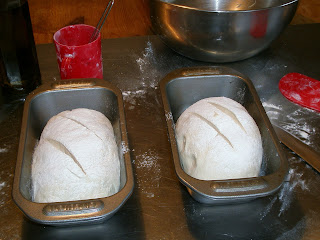 Sprinkle with flour ( use a tea strainer) and slash with a sharp knife. Cover with the garbage bag and allow to rise again for about 45mins. Another 5 mins of baking activity. 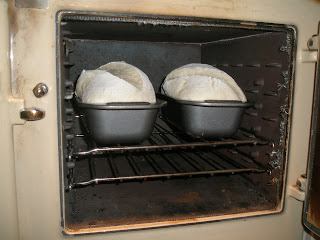 When risen  place in the middle of a hot oven , 250 degrees in the solid fuel Rayburn. Its better to have it too hot than too cool. bake for 45mins swopping the tins around after 30mins if the oven is very hot. Cooking with wood can be a bit hit or miss. 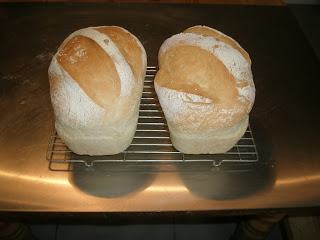 Turn loaves out and cool on a wire rack. When cool put one in a sealed plastic bag in the freezer for Wednesday onwards and start eating the other.

Next time you pass an artisan bakery treat yourself to a fancy sourdough or granary loaf it makes a nice change but its not for everyday.

In total that's about 15 mins and you have spent the rest of the time doing laundry, cleaning or just idling.......simples!
Posted by Tom Bryson at 06:43