We started milking Pia ten days ago and already she is giving nearly half a gallon ( two litres plus) a day. To make things easier for the milker we use a milk stand, the goat jumps up on to it, sticks her head through the yoke where there is a bucket of food and the milker is seated comfortably behind. 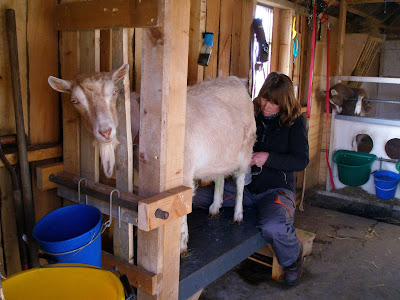 You'd think it would be difficult to train an animal to jump up there and stand still for twenty minutes ( we're still a bit slow at milking) but following Fay Ogden's advice we got her doing it within two days. Now when the pen gate is opened she shoots out and jumps up.....clever goat. she does have two incentives, food in the bucket and relief from the pressure of a litre of milk in her udder. Before milking her teats are wiped with a medicated tissue and after milking they are dipped in another medicated concoction to prevent mastitis organisms from entering the teat canal.


Despite the distractions; the kids jumping about in their pen and occasional cars on the road Pia is patient and milker friendly although she does get a bit bored towards the end if we're too slow.
Posted by Tom Bryson at 02:08