The last two weeks of February brought blue skies, and twelve hours daylight, well almost twelve, the cock is crowing at 6.30 in the morning and the ducks don't go into their house until 6.30 in the evening. Medieval farmers tried to finish their ploughing by the 1st March because the soil is warming up. Its the month to sow seeds and to tidy up the kitchen garden neglected since the Autumn.

The only crop that I'm self-sufficient in is garlic, it grows well here and the bulbs keep until the summer if they are strung up in a dry corner of the porch roof. Homegrown garlic is also the best quality, better flavour than the Chinese imports in the supermarkets and its so easy to grow even in pots if you have limited space.

From Easter until Christmas, about nine months I can grow all of the salads I need in the poly-tunnel and outdoors. When December comes around I've had enough of Pak Choi and stringy lettuce so supermarket bags make a nice change. Salads are cheap to grow and expensive to buy, a few packets of seeds of different varieties are enough for the whole growing season.  Its easy to grow too many salads so I make successional sowings once a month, uproot the mature stuff and feed it to the goats, that way we get small, tender leaves.

Its the day for planting a few early potatoes in plastic containers in the tunnel, main crop tatties take up too much ground but earlies are a real treat in June.

One other essential that I'm self-sufficient in is hen, goat  and duck shit. When the stuff is incorporated into the compost bin it speeds up composting. The result is a  long lasting soil improver that retains moisture, provides all of the plant nutrients and its cheap. 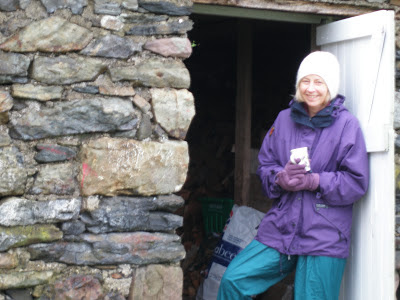 The weather in W. Ardnamurchan has been too good recently. Dormouse complained this week about the lack of good stories; living has been too easy, no hardship and deprivation, no drama or disasters.