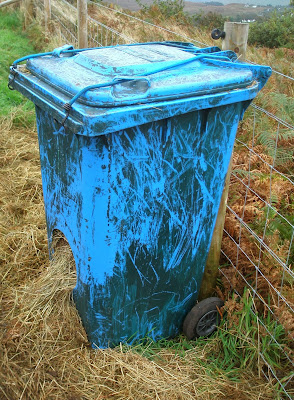 Even here at the end of the Ardnamurchan Peninsula there's occasional; "fly tipping" and the nearer you are to an urban area the more likely it is. When we lived in Kent there was a kind of ecological succession to it starting with a mattress, then a TV or defunct fridge and finally a supermarket trolley.If you are lucky, like me you might find an abandoned wheelie bin miles from its original home in a ditch or bit of woodland.

Cut a 25cm diameter hole about 40cm from the bottom on the front face and you have a weatherproof hay feeder that takes exactly one whole bale of hay.  Pop the bale in, cut the strings, tie the lid down with a bungee cord then tie the bin to a fence or strainer post. Its definitely weatherproof but nothing is really waste proof where goats are concerned.

The bin I found was 150 miles from home, I checked on AA Route-planner so the local authority were unlikely to come and pick it up.
Posted by Tom Bryson at 07:05