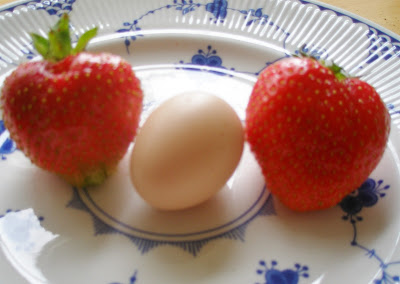 The outbreak of the first world war was allegedly reported by the Aberdeen Press and Journal with a headline, "Giant neep (turnip) found at Turriff". Today there's no war that I'm aware of,  but there was a ,"Giant strawberry found at Kilchoan" this afternoon, bigger than a hen's egg. Big isn't always better as you'll be aware if you have ever bought a big, red, shiny but totally tasteless apple in an American supermarket.

These are a variety bred for W. Scotland and called "Symphony" the flavour is quite good but not as good as the little ,"Mara des bois" the French cultivar of the alpine strawberry
Posted by Tom Bryson at 07:48